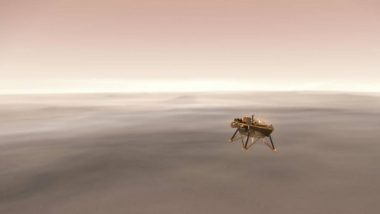 This illustration shows a simulated view of NASA's Interior Exploration using Seismic Investigations, Geodesy and Heat Transport (InSight) lander firing retrorockets to slow down as it descends toward the surface of Mars. (Photo Credit: NASA/JPL-Caltech)

U.S.’s NASA space agency has successfully landed a robot called Insight, on Mars’ surface. This is the first such device that has been sent to another planet to study seismic waves by probing Mars’s interior. NASA scientists aim to uncover signs of tectonic activity and clues about the Red planet’s past with this probe.

The probe reached the surface of Earth’s neighbouring planet after it was launched six months ago, traversing 482 million-kilometres and made a perilous, seven-minute descent through the Mars’ dusty atmosphere.

The confirmation of the probe’s touchdown came through shortly after 19:50 GMT. InSight landed on a vast plain on Mars’s surface, known as Elysium Planitia, close to the Red Planet's equator. NASA's mission control in California erupted in joy, hugs and handshakes were done all around as it was confirmed that InSight was safe on Mars’ soil.

Its new home is Elysium Planitia, a still, flat region where it’s set to study seismic waves and heat deep below the surface of the Red Planet for a planned two-year mission. Learn more: https://t.co/fIPATUugFo pic.twitter.com/j0hXTjhV6I

"Landing on Mars is one of the hardest single jobs that people have to do in planetary exploration," said InSight's lead scientist, Bruce Banerdt. "It's such a difficult thing, it's such a dangerous thing that there's always a fairly uncomfortably large chance that something could go wrong."

How will Insight Probe function on Mars?

Soon after landing, InSight probe is expected to deploy its solar panels, which were stowed for the descent. The robot has to start generating power through solar energy to operate its systems and to warm equipment in the sub-zero temperatures that persist on Mars.

What is the objective of Insight Probe’s mission?

The stationary 360-kilogram lander will use its 1.8-metre robotic arm to place a mechanical mole and seismometer on the ground. The self-hammering drilling device will dig almost five metres through Mars’ surface to measure the planet's internal heat which could indicate how active Mars still is.

The seismometer will listen for possible quakes and study vibrations will could reveal where the rock layers are and what they are made of.

The third experiment aims to use radio transmissions to very precisely determine how the planet is wobbling on its axis. Deputy project scientist Suzanne Smrekar explained: "If you take a raw egg and a cooked egg and you spin them, they wobble differently because of the distribution of liquid in the interior. And today we really don't know if the core of Mars is liquid or solid, and how big that core is. InSight will give us this information."

By examining the interior of Mars in these three different ways, scientists hope to understand how our solar system's rocky planets formed 4.5 billion years ago and why each planet is so different from each other.

What has Insight Probe sent from Mars?

Within minutes of making touchdown, InSight sent its first photo back to Earth – it was a view of a flat, smooth expanse on Mars’s surface called Elysium Planitia where it landed.

📸 Wish you were here! @NASAInSight sent home its first photo after #MarsLanding:

InSight’s view is a flat, smooth expanse called Elysium Planitia, but its workspace is below the surface, where it will study Mars’ deep interior. pic.twitter.com/3EU70jXQJw

This was NASA's ninth attempt to land on Mars since the 1976 Viking probes. NASA last landed on Mars in 2012 with the Curiosity rover.

(The above story first appeared on LatestLY on Nov 27, 2018 05:30 AM IST. For more news and updates on politics, world, sports, entertainment and lifestyle, log on to our website latestly.com).