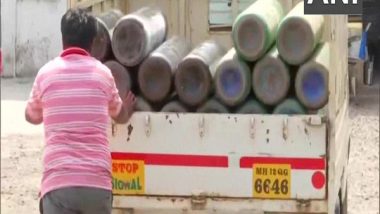 Kathmandu, April 24: The Nepal government has sought assistance from India for the supply of oxygen, antiviral drugs and intensive care unit beds, as the countrys healthcare system is cracking under the pressure of the rising coronavirus caseload.

According to officials, a request to that effect was made to New Delhi by the Ministry of Health through the Ministry of Foreign Affairs. The Nepali embassy in New Delhi has already started taking up the matter with concerned Indian government agencies, officials said. Oxygen Shortage in Delhi: If Anyone Obstructs Oxygen Supply, We Will Hang Him, Says Delhi High Court.

"We have received a list of requirements from the government and have forwarded them to relevant (Indian) government agencies," a senior Nepali diplomat at the Nepali embassy in Delhi told the Post over the phone.

The request, however, has come at a time when India itself is struggling to contain the lethal second wave of the coronavirus, with the daily count of infections soaring over 300,000 and the number of daily deaths hitting a record 2,263.

Public health experts say the request to India at this time exposes the government's lack of preparedness against the looming second wave about which they had consistently warned.

That the second wave of the coronavirus was going to strike was evident when India, after a decline in the number of infections, which many termed "miraculous", started reporting a sudden resurgence of the virus. The daily count started to shoot up at an exponential rate. Concerns had grown in Nepal, but authorities by and large made no moves, while governance took a backseat as politicians, including Prime Minister K.P. Sharma Oli, engaged in a bitter political fight.

Nepal too had seen a sudden decline in the number of cases after the daily count hit the highest ever on October 21 last year at 3,439. But from less than 100 new infections on March 12, the country on Thursday reported 2,365 new cases.

The Ministry of Health said on Friday the number of new cases in the past 24 hours hit 2,449, with five deaths.

Officials say the country's health facilities are already overwhelmed, with hospitals running out of intensive care beds, oxygen and Remdesivir.

About a few weeks ago, when India decided to impose a ban on exports of Remdesivir, Nepali officials said that Nepal won't be impacted much by the decision, and it was importing the antiviral drug from Bangladesh as well.

Public health experts, doctors and analysts say India is no doubt a friendly country but extending a begging bowl at a time when the neighbour itself is struggling to deal with one of the biggest humanitarian crises of its own just does not make sense.

"Why not procure some items like Remdesivir from Bangladesh, as it is manufactured there as well," said Baburam Marasini, former director of the Epidemiology and Disease Control Division. "The government can purchase small oxygen concentrations also from East Asian countries like Thailand and Malaysia."

As the coronavirus cases are swelling, there are concerns about hospitals running out of oxygen. Out of 185 hospitals across the country, only 26 have oxygen plants and not all of them are in operation.

As far as intensive care unit beds are concerned, their number currently stands at 1,486 throughout the country. The number of general beds which can be allocated for coronavirus patients stands at 18,917.

"Until now, as far as I understand, we have a fairly good stock of oxygen, but we might need more. However, there is a need to preserve what we have, as there are chances oxygen, which is in high demand in India, could be smuggled out."

(The above story first appeared on LatestLY on Apr 24, 2021 01:17 PM IST. For more news and updates on politics, world, sports, entertainment and lifestyle, log on to our website latestly.com).