The North Korean establishment has accused the United States of “double-dealing” and “hatching a criminal plot” against Pyongyang, after Washington abruptly cancelled a scheduled visit by U.S. Secretary of State Mike Pompeo. 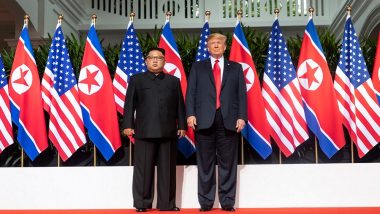 The North Korean establishment has accused the United States of “double-dealing” and “hatching a criminal plot” against Pyongyang, after Washington abruptly cancelled a scheduled visit by U.S. Secretary of State Mike Pompeo. The statement was issued in the North Korean state-controlled newspaper on Sunday.

“Such acts prove that the U.S. is hatching a criminal plot to unleash a war against the DPRK and commit a crime which deserves merciless divine punishment in case the U.S. fails in the scenario of the DPRK’s unjust and brigandish denuclearisation first,” the paper said.

“We cannot but take a serious note of the double-dealing attitudes of the U.S. as it is busy staging secret drills involving man-killing special units while having a dialog with a smile on its face,” it noted.

The editorial, which did not mention the Pompeo visit, urged Washington to give up the “pointless military gamble” and implement the Singapore agreement, in which the leaders pledged to work towards a complete denuclearisation of the Korean Peninsula.

Since the June 12 summit which saw U.S. President Donald Trump meet with North Korean leader Kim Jong-un in Singapore to discuss the denuclearization of the Korean Peninsula, hectic negotiations have been on between the two sides but there has been no real progress. Infact, the UN’s nuclear watchdog the IAEA said in its recent report that a lot of work to produce nuclear-armed weapons in ongoing in North Korea.

With this as the backdrop and no real outline of its commitment to denuclearization, Donald Trump cancelled Mike Pompeo’s visit to Pyongyang. This would have been Pompeo’s fourth visit to North Korea in as many months.

I have asked Secretary of State Mike Pompeo not to go to North Korea, at this time, because I feel we are not making sufficient progress with respect to the denuclearization of the Korean Peninsula...

Trump has also blamed China for hindering the progress with North Korea and accused it of not putting enough pressure on Pyongyang, due to the ongoing trade spat between Washington and Beijing.

(The above story first appeared on LatestLY on Aug 27, 2018 05:37 AM IST. For more news and updates on politics, world, sports, entertainment and lifestyle, log on to our website latestly.com).