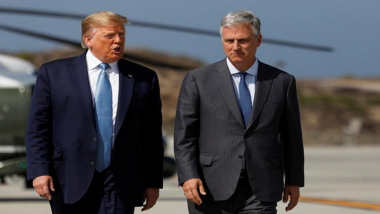 Washington, July 27: Robert O'Brien, the National Security Advisor (NSA) to US President Donald Trump, tested positive for COVID-19. Reports on Monday confirmed that O'Brien has contracted the lethal infection and was diagnosed with mild symptoms. The 54-year-old is the highest-ranking official in the Trump administration to be infected with coronavirus.

The White House officials did not immediately comment whether the President had came in close contact with the NSA in the past couple of days. Trump and his V-P Mike Pence are, however, regularly tested for COVID-19 to ensure that the disease is not diagnosed at a later stage. Donald Trump Signs Executive Orders to Cut Prescription Drug Prices.

A senior White House official, while speaking to news agency AP, confirmed that O'Brien has shown mild symptoms and is "self-isolating". He is "working from a safe location away from the site", the official said, adding that the regular functioning of the National Security Council has not been vitiated.

In May, the personal valet of President Trump and press secretary of V-P Pence had contracted the infection. No senior official of the federal administration had, however, tested positive for the disease before O'Brien.

Nationwide, the surge in COVID-19 cases continue unabated. The overall count has crossed 4 million, whereas, the number of deaths were recorded as 149,864 by the time this report was published.

Globally, coronavirus has infected more than 16 million cases, with the disease peaking in over 40 countries. A vaccine, which is being considered as the safest bet to inculcate herd immunity, is expected to be released by end of the current year.

(The above story first appeared on LatestLY on Jul 27, 2020 08:05 PM IST. For more news and updates on politics, world, sports, entertainment and lifestyle, log on to our website latestly.com).