Saudi Arabia: US Woman Loses Daughter’s Custody Battle As Husband Uses Bikini Photos to Prove Her Inability to Take Care of the Child

According to court documents, Vierra's ex-husband got a favourable ruling as the judge accepted his claim that she was unfit to raise her child as she was a Westerner and a businesswoman. 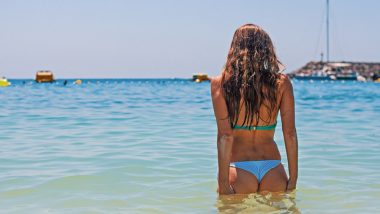 New York, July 19: A US woman in Saudi Arabia has lost the custody battle for her daughter as her ex-husband used her bikini photos to cite she is not fit to look after the child. Bethany Vierra's ex-husband submitted photos of her in a bikini, in yoga pants and with her hair uncovered -- an evidence of suspect or outright forbidden dress in Saudi Arabia where women are required to wear loose abayas in the public, the media reported.

He claimed in the court before the judge that she was unfit to raise their daughter Zeina, 4. In her argument, Vierra said the photos were clicked in the US and were taken from her social media accounts. The court, however, passed the order in her ex-husband's favour despite witnessing videos of his alleged drug use and verbal abuse. Migrant Children Held in US Government Custody Subjected to Sexual Abuse by Caretakers: Report.

Vierra's testimony was also partially rejected as no male witness turned up to back her claim. As per the law in Saudi Arabia, mothers are usually given the custody of sons till the age of 9, and daughters till 7. Fathers remain the children's legal guardians during that period.

Besides, Saudi Arabian courts emphasise that children are raised in accordance with Islam. According to court documents, Vierra's ex-husband got a favourable ruling as the judge accepted his claim that she was unfit to raise her child as she was a Westerner and a businesswoman.

(The above story first appeared on LatestLY on Jul 19, 2019 09:24 AM IST. For more news and updates on politics, world, sports, entertainment and lifestyle, log on to our website latestly.com).