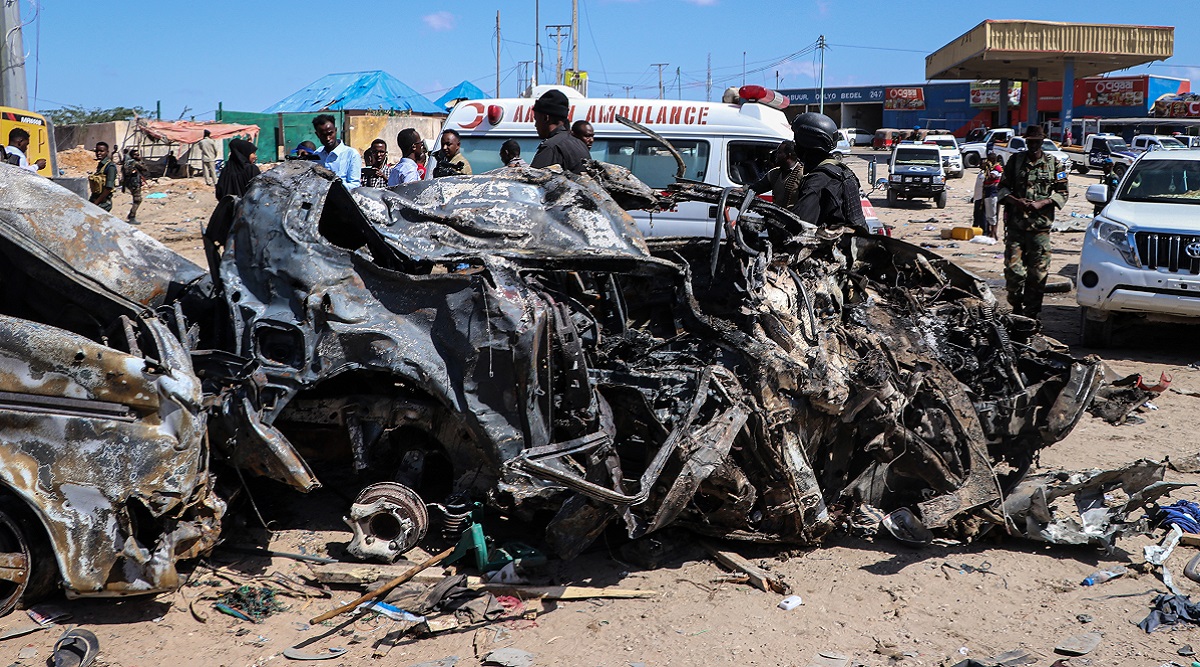 Mogadishu, December 28: A massive car bomb exploded in a busy area of Mogadishu on Saturday, leaving at least 76 people dead, many of them university students, officials said. The blast occurred at a busy intersection southwest of the Somali capital where traffic is heavy because of a security checkpoint and a tax office. The wounded were carried on stretchers from the site, where the force of the explosion left charred and twisted remains of vehicles.

Mogadishu is regularly hit by car bombings and attacks waged by Al-Shabaab Islamist militants allied to Al-Qaeda, but Saturday's blast is the deadliest in about two years. Many of those killed are believed to be university students whose bus was hit by the blast. Two Turkish nationals also died, police said. Car Bomb Blast Near Market in Syria Border Town, At Least 13 Dead.

"The number of casualties we have confirmed is 76 dead and 70 wounded, it could still be higher," the director of the private Aamin Ambulance service, Abdukadir Abdirahman Haji, told AFP. Police officer Ibrahim Mohamed described the explosion as "devastating".

"We have confirmed that two Turkish nationals, presumably road construction engineers are among the dead, we don't have details about whether they were passing by the area or stayed in the area," he said.

Mogadishu's mayor Omar Mohamud Mohamed told a press conference that the exact number of dead was not yet known, but that around 90 people were wounded. "We will confirm the exact number of the number of the dead later but it is not going to be small, most of the dead were innocent university students and other civilians," he said. "This was a devastating incident because there were many people including students in buses who were passing by the area when the blast occurred," said another witness, Muhibo Ahmed.

Sakariye Abdukadir, who was near the area when the car bomb detonated, said the blast "destroyed several of my car windows". "All I could see was scattered dead bodies... amid the blast and some of them burned beyond recognition." No group has yet claimed the attack. Mogadishu is regularly hit by attacks by Al-Shabaab, which has fought for more than a decade to topple the Somali government.

The militant group emerged from the Islamic Courts Union that once controlled central and southern Somalia and is variously estimated to number between 5,000 and 9,000 men. In 2010, the Shabaab declared their allegiance to Al-Qaeda. In 2011, its fighters fled positions they once held in the capital Mogadishu, and have since lost many strongholds.

But they retain control of large rural swathes of the country and continue to wage a guerrilla war against the authorities. Two weeks ago, five people were killed when Shabaab militants attacked a Mogadishu hotel popular with politicians, army officers and diplomats in an hours-long siege.

Since 2015, there have been 13 attacks in Somalia with 20 or more killed, 11 of which have been in Mogadishu, according to a tally of AFP figures. All of them involved car bombs. The deadliest attack in the country's history was a truck bombing in October 2017 in Mogadishu which left 512 people dead and around 295 injured.