In the wake of serial blasts in Sri Lanka, India on Saturday issued a travel advisory for its citizens asking them not to travel to the neighbouring country. The Ministry of External Affairs (MEA) asked the Indians not to undertake any non-essential travelling to Sri Lanka. 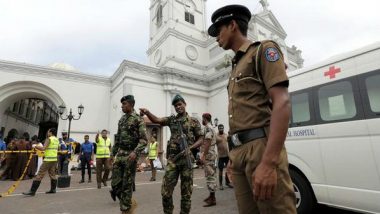 Colombo, April 27: In the wake of serial blasts in Sri Lanka, India on Saturday issued a travel advisory for its citizens asking them not to travel to the neighbouring country. The Ministry of External Affairs (MEA) asked the Indians not to undertake any non-essential travelling to Sri Lanka. The MEA in a statement said, “In view of the prevailing security situation in Sri Lanka in the aftermath of terror attacks on 21 April 2019, Indian nationals intending to travel to Sri Lanka are advised not to undertake non-essential travel.” Sri Lanka Serial Blasts: US, UK, Australia Issue Travel Advisory For Citizens, Warn of More Attacks This Weekend Between April 26 And 28.

The ministry also asked the citizens travelling Sri Lanka in case of important work to contact Indian High Commission in Colombo if there is any emergency. The MEA said, “In case of those undertaking essential travels, they can contact the High Commission of India in Colombo or the Assistant HC in Kandy/Consulates in Hambantota & Jaffna in case of requirement of any assistance. Helpline no. of the Indian HC are available on the Mission’s website.” Sri Lanka: Shooting Reported During Police Raid in Ampara Sainthamaruthu Days After Easter Suicide Bombings.

Earlier in the day, Two suspected Islamic State (ISIS) militants were killed in an exchange of fire with the Sri Lankan Army last night. Reports claim that the troops were met with gunfire after they raided a makeshift bomb factory in Kalmunai town, located in the eastern part of the country. According to some reports, at least 15 people, including six children and three women, were also killed when suicide bombers blew themselves up during a shootout with security forces in Sri Lanka's Eastern province.

Around 260 persons were killed in the coordinated strikes, targeting four churches and three major luxury hotels in Colombo, Negombo and Batticaloa. The Sri Lankan government has suspected the involvement of an international hand, considering the coordinated and organised manner in which the serial blasts were executed. The Islamic State (ISIS) claimed responsibility of the attack nearly two days after the terror strike. Meanwhile, authorities have also charged local terrorist group National Thowheed Jamath (NTJ) for the blasts.

(The above story first appeared on LatestLY on Apr 27, 2019 08:03 PM IST. For more news and updates on politics, world, sports, entertainment and lifestyle, log on to our website latestly.com).