Syrian Strikes Were Aimed at Motivating Terrorists on Our Soil: Damascus Envoy to UN

"The three aggressors have sent a message to the terrorists to continue with their heinous crimes not only in Syria, but in the entire Middle East," he said. 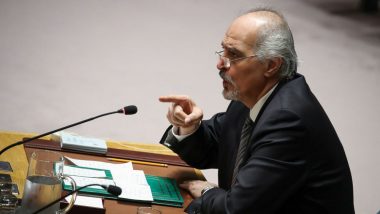 Damascus, April 14: Syria's Permanent Representative at the United Nations, Bashar Jaafari, accused the United Nations and its allies of abetting the terrorists on the Syrian soil by launching aerial strikes against the Bashar al-Assad regime.

The 103 missile fired today, Jaafari said, were aimed at motivating the militants on the ground to continue with the insurgency. "The three aggressors have sent a message to the terrorists to continue with their heinous crimes not only in Syria, but in the entire Middle East," the Damascus envoy told the UN.

By the "three aggressors", Jaafari referred to the trio of the US, the UK and France which jointly launched the missile strikes in the wee hours of Saturday. The "precision strikes", as US President Donald Trump called them, were targeted at three locations where his Syrian counterpart Bashar al-Assad has allegedly stored chemical weapons.

The attacks were carried out in response to the "inhumane" chemical attack in Eastern Ghouta which claimed the lives of over hundred civilians, said French President Emmanuel Macron.

UK Prime Minister Theresa May also justified the unprecedented step taken by her government, claiming that "deterring Assad is extremely necessary" to save the lives of hundreds of Syrians.

The Opposition in the UK, however, remained unimpressed, accusing May of exhibiting uncalled for aggression against Syria. Leader of Opposition Jeremy Corbyn accused her of "falling into the footsteps of Trump".

"Theresa May should have sought parliamentary approval, not trailed after Donald Trump... Britain should be playing a leadership role to bring about a ceasefire in the conflict, not taking instructions from Washington and putting British military personnel in harm’s way," Corbyn said.

Meanwhile, Russia, the prime-backer of Syria, vowed to avenge the strikes by the US and its allies. Not only did Moscow warned US of consequences, but also played down the damage caused. "Out of the 103 strikes launched, 71 were gunned down by the Soviet-made air-defense systems," the Russian Foreign Ministry said in a statement.

Iran, another time-tested ally of the Shia-majority Syria, accused the US-led coalition of "violating the UNSC agreement" by attacking a sovereign nation. It further accused Washington of raking up a "fake propaganda" about the use of chemical weapons. "If the coalition knew the location of chemical facilities why didn’t they share it with OPCW (Organisation for the Prohibition of Chemical Weapons)," said the statement issued by Tehran.

(The above story first appeared on LatestLY on Apr 15, 2018 12:07 AM IST. For more news and updates on politics, world, sports, entertainment and lifestyle, log on to our website latestly.com).