A Tsunami warning was also issued after the volcano, said reports. 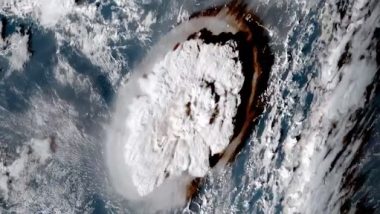 The images and posts shared does in fact shows the violent intensity of the volcano. The force of the volcano has now given rise to warning signs of Tsunami.

Tonga's Hunga Tonga volcano just had one of the most violent volcano eruptions ever captured on satellite. pic.twitter.com/M2D2j52gNn

It is literally dark in parts of Tonga and people are rushing to safety following the eruption. 🇹🇴 pic.twitter.com/7NoP0y9GCo

(The above story first appeared on LatestLY on Jan 15, 2022 12:04 PM IST. For more news and updates on politics, world, sports, entertainment and lifestyle, log on to our website latestly.com).