Although Pakistanis and their supporters elsewhere cite the Security Council asking for a plebiscite to be held in Kashmir, they ignore the precondition of Pakistan's withdrawal from the occupied areas. 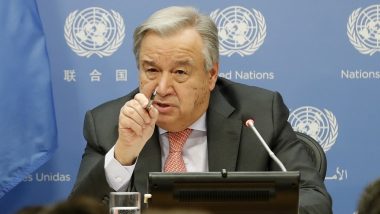 United Nations, February 17: UN Secretary General Antonio Guterres said that the Security Council resolutions on Kashmir have to be implemented e and although he did not make a reference to it, the main resolution requires Pakistan to withdraw from the areas it occupies. Guterres, who is on a visit to Pakistan, said at a news conference in Islamabad on Sunday according to a transcript released here, that: "It is clear that we have taken a position about the need for Security Council resolutions to be implemented and for effective de-escalation and dialogue linked to that, with another very important condition, which is full respect for human rights and (fundamental) freedoms in Jammu and Kashmir."

Security Council Resolution 47 adopted on April 21, 1948, requires the Pakistani government "to secure the withdrawal from the State of Jammu and Kashmir of tribesmen and Pakistani nationals not normally resident therein who have entered the State for the purpose of fighting, and to prevent any intrusion into the State of such elements and any furnishing of material aid to those fighting in the State". UN Secretary-General Antonio Guterres Backs ‘Self-Policing’ to Fight Hate Speech.

Although Pakistanis and their supporters elsewhere cite the Security Council asking for a plebiscite to be held in Kashmir, they ignore the precondition of Pakistan's withdrawal from the occupied areas. Guterres began a three-day visit to Pakistan, his first as Secretary General, on Sunday to participate in an international conference of 40 years of Pakistan hosting Afghan refugees.

During the trip, he is scheduled to visit Gurdwara Darbar Sahib in Kartapur, which gives direct access to pilgrims from India through a special corridor inaugurated last year. Replying to a journalist's question about UN's role in Kashmir, Guterres said that while he as offered his good offices, he "can only work when accepted by both sides".

He said that the UN Human Rights High Commissioner Michelle Bachelet made an "important contribution to clarifying what has happened" in Kashmir through her report. In a report released in July, her office criticised both India and Pakistan for not taking any concrete steps to address the numerous concerns it had raised in an earlier report.

While criticising India for what it said was the lack of accountability for actions by security forces and human rights violations, it also said that there were reports that two terror groups were recruiting children on the Indian side of the Line of Control (LOC) and carrying out attacks on civilians.

Bachelet has since criticised India over the restrictions and human rights violations after Kashmir was put under President's rule and the subsequent change in its special status under the Constitution's Article 370. Guterres said that the UN Military Observer Group in India and Pakistan (UNMOGIP) should have full freedom of movement on the Indian side of the LOC as it has in the area under Pakistani control and that its equipment would be reinforced.

"We believe that UNMOGIP should have full freedom of movement; it has on the Pakistani side e we hope that this will also be achieved on the other side, and we will be strengthening its equipment capacity in order to better be able to implement its mandates," he said replying to the question that mentioned 287 alleged ceasefire this year.

In his introductory remarks, Guterres said that he was grateful for the UNMOGIP's work and that it "will continue to monitor the ceasefire at the Line of Control in accordance with its mandate". India maintains that the UNMOGIP has no useful role in Kashmir because under the Simla Agreement of 1972 between the two countries, it is a bilateral issue.

India withdrew the government accommodation given to it in New Delhi. Guterres earlier inaugurated a new UNMOGIP headquarters building in Pakistan. Guterres said that he had discussed the situation in South Asia with Pakistan Foreign Minister Shah Mehood Qureshi, and he was "deeply concerned about the increase in tensions that we have witnessed last year".

"I have repeatedly stressed the importance of exercising maximum restraint and taking steps to de-escalate, both militarily and verbally, while reiterating my offer to exercise my good offices, should both sides ask."

He added: "Diplomacy and dialogue remain the only tools that guarantee peace and stability, with solutions in accordance with the Charter of the United Nations and the resolutions of the Security Council."

(The above story first appeared on LatestLY on Feb 17, 2020 11:48 AM IST. For more news and updates on politics, world, sports, entertainment and lifestyle, log on to our website latestly.com).