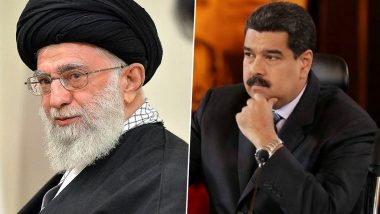 Washington, September 21: The Donald Trump regime rolled out dual sanctions on Monday, targeting arch rivals Iran and Venezuela. Secretary of State Mike Pompeo announced the restoration of full "UN sanctions" against the Iranian Defence Ministry, along with President Nicolas Maduro who has been developing defence ties between Caracas and Tehran despite the latter being sanctioned. Iran Dismisses US Efforts at UN Sanctions, Local Currency Drops at Lowest Level Ever.

The imposition of UN sanctions comes at a time when the authority of United States has been challenged by traditional allies. Members of the European Union state have raised apprehensions over the spree of diplomatic moves against Iran, which they are considering to be unilateral.

Pompeo, while announcing the sanctions in Washington today, said Europe "must enforce them" against Iran and Venezuela. "Our actions today are a warning that should be heard worldwide," he added.

This Order is critical to enforcing UN arms embargo on Iran. The order will greatly diminish the Iranian regime’s capacity to export arms to terrorists and dangerous actors throughout the region, as well as its ability to acquire weapons to build up its own forces: US President https://t.co/K1oeWae9Fg

What Are UN Sanctions?

A country, organisation, entity or an individual being sanctioned by the UN is globally blacklisted. The global body bars other companies or individuals to financially trade with a person or entity that has been slapped with the sanctions. In other words, it ends up imposing a financial embargo.

Among countries that have been sanctioned by the US include Cuba, North Korea, Syria, Sudan, Iran and Venezuela. The Trump administration has also blacklisted entities and persons based in economic rival China.

The United States has been using sanctions as a weapon of diplomatic assault against countries with whom its shares adverse relations. The sanctions, however, require validation from the majority of UN Security Council members and the basis for imposing them should be legit viz. counter-terrorism or human rights violation.

(The above story first appeared on LatestLY on Sep 21, 2020 09:59 PM IST. For more news and updates on politics, world, sports, entertainment and lifestyle, log on to our website latestly.com).