US Presidential Debate 2020: On COVID-19, Donald Trump Says Joe Biden's Only Plan is to 'Shut Down Whole Country'

Trump's scathing remark came in the backdrop of Biden holding him squarely responsible for the infection tally peaking to 7 million in the United States so far. "200,000 lives have been lost as the President has no plan whatsoever to handle the crisis," he said. 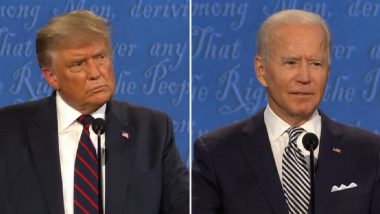 Cleveland, September 29: President Donald Trump and his Democratic Party challenger Joe Biden traded heated jibes when the issue of COVID-19 was raised in the first presidential debate. In an apparent bid to warn voters of a total lockdown in case Biden prevails in the November 3 polls, Trump said his rival's only coronavirus response plan is to "shut down the whole country". US Elections 2020 Calendar: Presidential Debates, Polling, Results and Inauguration Day — Key Dates to Mark.

Trump's scathing remark came in the backdrop of Biden holding him squarely responsible for the infection tally peaking to 7 million in the United States so far. "200,000 lives have been lost as the President has no plan whatsoever to handle the crisis," he said.

This prompted the President to claim that more fatalities would have been recorded if Biden was leading the nation. "You did not wanted to impose a ban on flights from China, the epicentre of virus," he said, adding that the death count would had peaked to "2 million" had Biden been the President.

Trump further pointed out that the transparent data sharing apparatus of the US ensured that the country is made aware of the exact death toll. "You don't know how many died in China, Russia India. They don't exactly give you straight counts, just so you understand," he said.

Biden, however, blamed the President of manipulating the facts to hide his "failure" on handling the coronavirus pandemic. He also questioned Trump for downplaying the suggestions of scientific experts. "He did not want people to wear masks even though it has been proved that masks reduce the rate of transmission," the former VP said.

Among other issues debated during the presidential debate in Cleveland included Supreme Court judge appointment, healthcare programme, economic recovery, racism, law and order and integrity of the elections. The two leaders would collide in two more debates - in Miami on October 15 and Nashville on October 22 - before the high-stake poll contest on November 3.

(The above story first appeared on LatestLY on Sep 30, 2020 07:39 AM IST. For more news and updates on politics, world, sports, entertainment and lifestyle, log on to our website latestly.com).