As the war in Ukraine continues to rage on, reports have claimed that Russian President Vladimir Putin will be stepping down from the top post soon due to his illness. 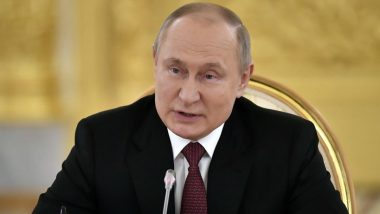 Mumbai, January 24: As the war in Ukraine continues to rage on, reports have claimed that Russian President Vladimir Putin will be stepping down from the top post soon due to his illness as his health condition is reportedly deteriorating quickly. Several reports are flying that claims the 70-year-old leader is suffering from Parkinson's and cancer, and his health condition is getting worse.

RadarOnline reported that the Russian President is set to “disappear” from his leadership position within the Kremlin because there is “clearly something wrong” with his health. “He's probably faced with another call-up. That clearly is deeply unpopular in Russia. There must be massive tensions within the leadership group inside the Kremlin, there must be massive tensions socially across Russia over this whole issue.” Sir Richard Dearlove, the former head of MI6, told Daily Star. Vladimir Putin Health Update: Russian President Suffering From Headaches Linked to Parkinson’s Disease, Using 'Body-Doubles' to Hide Worsening Condition, Says Report.

The reports of the Russian leader stepping down come as he is concerned that his government will soon be toppled by those who are against the war since his political career hangs in the balance as the war against Ukraine is "going from bad to worse.” The Russia-Ukraine war has been economically draining for both countries. Amid this, Putin may pass the baton to his chosen successor and retire to his 1 billion pounds Black Sea "palace." Vladimir Putin Health Update: Russian President Terminally Ill, Being Kept Alive on Western Cancer Drugs, Say Reports.

Last month, a report claimed that the warmonger is being treated for cancer with western medicines and is being kept alive to continue his war against the neighbouring country as 2023 could be his last year in power.

(The above story first appeared on LatestLY on Jan 24, 2023 02:47 PM IST. For more news and updates on politics, world, sports, entertainment and lifestyle, log on to our website latestly.com).