Opposition candidate Yoon Suk-yeol was elected South Korea's next President on Thursday after an "unbelievably" close race that underlined deep divisions along regional, generational and gender lines and could weaken his mandate even before taking office. 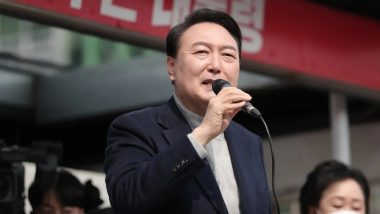 Seoul, March 10: Opposition candidate Yoon Suk-yeol was elected South Korea's next President on Thursday after an "unbelievably" close race that underlined deep divisions along regional, generational and gender lines and could weaken his mandate even before taking office.

The less than 1 percentage point gap makes this year's election the closest-ever.

"I will consider national unity as my top priority," he said.

"I did my best but failed to live up to your expectations," he said. "All responsibility lies with me. I extend my congratulations to candidate Yoon Suk-yeol."

Yoon also said that he learned during the campaign "what is required in order to become a national leader and how to listen to the voices of the people."

He thanked his competitors Lee and Sim Sang-jeung of the minor progressive Justice Party.

"Our competition is over for now," he said. "We must work together to become one for the people and for the Republic of Korea."

Yoon added that as soon as he takes office he will respect the spirit of the Constitution and the National Assembly while working together with the opposition party and serving the people.

Lee had initially led Yoon but the gap between them narrowed before Yoon overtook Lee at the point where 51 percent of the vote was counted.

This year's race was billed as an "unlikeable election" due to the public's aversion to the candidates and their negative campaigning against each other.

Yoon, 61, a former prosecutor general, rode a wave of public anger at the administration of outgoing President Moon Jae-in and his ruling party to seize on a message of fairness, common sense, principle and the rule of law.

Yoon's election could have profound impacts on the direction South Korea will take on foreign policy, including relations with North Korea, and on economic issues, such as welfare and real estate policies.

Yoon takes a hard line on national security, saying a preemptive strike may be needed to respond to an imminent threat from North Korea. He has also pledged to deploy additional units of the US THAAD antimissile system in South Korea to deter North Korean aggression.

(The above story first appeared on LatestLY on Mar 10, 2022 10:42 PM IST. For more news and updates on politics, world, sports, entertainment and lifestyle, log on to our website latestly.com).