Inter Milan reclaimed top spot in Serie A after a 1-0 win over 10-man Udinese on Saturday as Juventus lost three players to injury in a painful goalless draw at Fiorentina to complicate preparations for next week's Champions League opener. 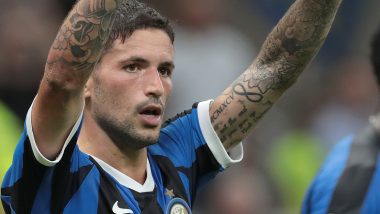 Milan, September 15: Inter Milan reclaimed top spot in Serie A after a 1-0 win over 10-man Udinese on Saturday as Juventus lost three players to injury in a painful goalless draw at Fiorentina to complicate preparations for next week's Champions League opener. Stefano Sensi's diving header was enough to seal a maximum nine points for Antonio Conte's Inter ahead of their European opener against Slavia Prague in the San Siro next Tuesday. Juventus Beat Parma 1-0 in Serie A 2019 Opener, Cristiano Ronaldo's Club Register Ninth Straight Victory.

But as Maurizio Sarri made his debut on the Juventus bench after recovering from pneumonia, the Italian champions showed signs of weakness four days before their trip to Atletico Madrid. Juventus are trailing two points behind Inter Milan after three games and could be overtaken by city rivals Torino who host promoted Lecce on Monday.

Napoli meanwhile warmed up for European holders Liverpool on Tuesday with a Dries Mertens double sealing a 2-0 win over crisis club Sampdoria, to move up to fourth in the table. "We wouldn't have deserved to win this game," said Sarri as Portuguese star Cristiano Ronaldo and his teammates lacked inspiration and struggled physically.

The reigning eight-time Serie A champions are already missing injured captain Giorgio Chiellini, Mattia De Sciglio and Marko Pjaca. And Brazilian Douglas Costa pulled up with a hamstring problem minutes into the game in Florence, followed by Miralem Pjanic with a muscular issue with Danilo later suffering cramps in the heat. They nevertheless held on despite pressure with former French international Franck Ribery impressive on his first start for the hosts.

"It was a very complicated situation as we used all our substitutions for injuries, and had no fresh players to introduce at key moments," said Sarri.

Team with less character would lose such a game." Midfielder Rodrigo Bentancur added: "We got an important point, today we saw a bad Juventus.

"We suffered on the wings, they were very good. We still have to get used to Sarri's game, but we are on the right track. Now we want to win in Madrid."

- 'Better than Ronaldo'. Ribery, 36, went off to a standing ovation from the crowd at the Artemio Franchi Stadium after an hour as his team earned their first point this season.

Ribery "played better than Ronaldo," insisted Fiorentina's new owner Rocco Commisso, as the former Bayern Munich midfielder did well to neutralise Ronaldo, who had scored four goals for Portugal in European qualifiers this week. Ronaldo failed to add to his tally with an acrobatic bicycle kick in the 85th minute flying over the bar. In the San Siro, Udinese played an hour a man down after Rodrigo de Paul saw red for slapping Antonio Candreva.

Sensi broke through just before the break getting his head to a cross from fellow newcomer Diego Godin.

Former Manchester United forward Alexis Sanchez came on for the final ten minutes, and was denied his first goal by Udinese goalkeeper Juan Musso. Napoli played their first home game after renovations carried out to their San Paolo Stadium. Giovanni Di Lorenzo provided the cross for Mertens to tap in after 13 minutes. New signing Fernando Llorente made his debut and the former Tottenham player had an immediate impact, sending the ball back to Mertens who finished off for a 67th-minute goal which took a slight deflection off Sampdoria defender Alex Ferrari.

"We did well, played qualify football," said Caro Ancelotti. "We also kept a clean sheet, so at least that was a sigh of relief," he added, after Napoli conceded seven goals in their first two games against Fiorentina and Juventus. Eusebio Di Francesco's Sampdoria are in the midst of a crisis as the Genoa club remain bottom of the table with no points and nine goals conceded.