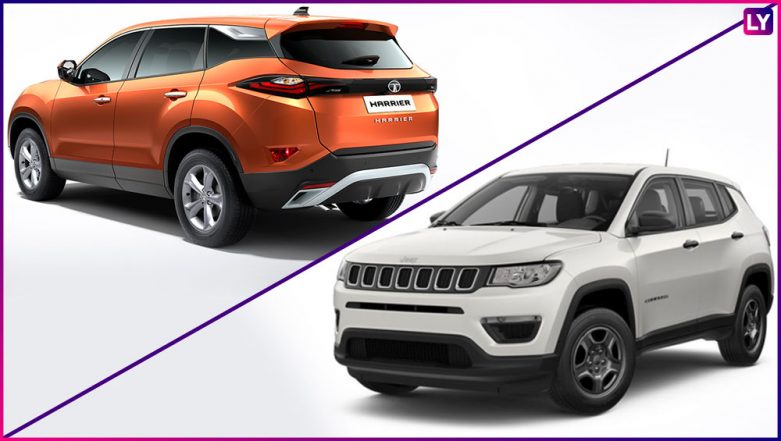 The forthcoming 2019 Tata Harrier SUV is the next big product from the homegrown auto manufacturer, which will be launched next month. The company will be launching the new Tata Harrier SUV in India on January 23, 2019. To recall, Tata Motors showcased the SUV at Auto Expo 2018 in the form of H5X concept earlier this year in February. Ahead of the launch, the upcoming premium 5-seater SUV has been caught alongside its arch rival – Jeep Compass, courtesy of Autocar. The company is already taking pre-orders for the SUV, which will be launched in a 5-seater avatar initially. 2019 Tata Harrier SUV To Be Launched in India on January 23; Expected Price, Features, Specifications, Bookings & Images.

The new Tata Harrier will be pitted against the rivals such as Hyundai Creta and Jeep Compass. In terms of dimensions, the Tata Harrier is much bigger than Creta and Compass SUVs. It measures 4,598 mm in length, 1,714 mm in height and 1,894 mm in width and wheelbase stands at 2,741 mm. On the other hand, Jeep Compass gets length of 4,395mm, width of 1,818 mm and height of 1,640 mm. Tata Harrier 2019 Images, Specifications & Features Listed Online on Official Website Ahead of India Launch. 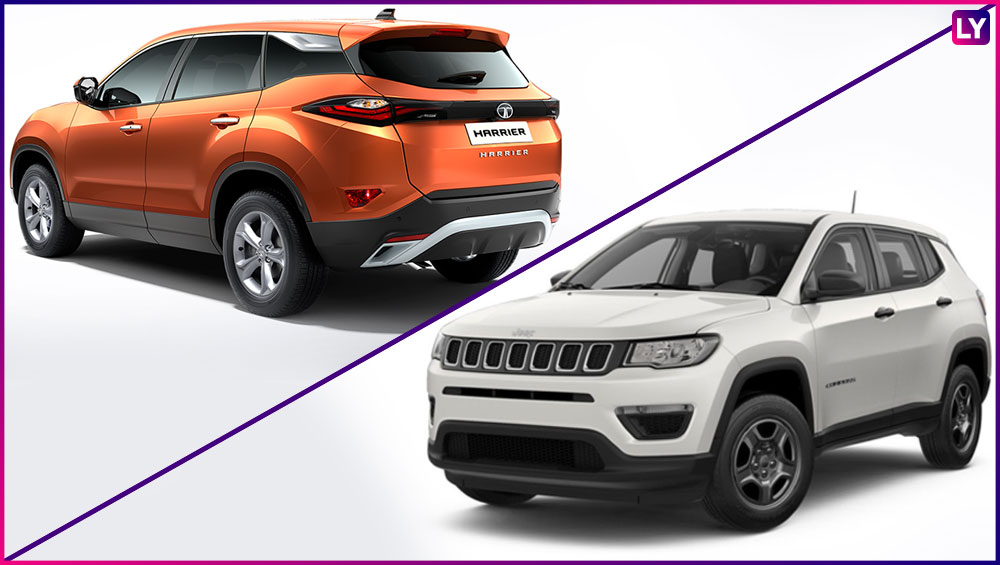 To be based on the modified version of Land Rover Discovery Sport platform, the company has employed high tensile steel to keep the pricing down. Under the hood, the SUV will be offered in same diesel engine as seen on Jeep Compass, which is a 2.0-litre Multijet, Fiat-sourced diesel engine. The 2.0-litre Kryotec engine is capable of making maximum power of 140 Bhp with 350 Nm of peak torque. Transmission functionalities on the new Tata Harrier will be taken care by 6-speed manual gearbox only. The SUV will miss out on automatic transmission as well as AWD. The SUV also misses out on a sunroof, however, will be seen with touchscreen system, 9-speaker surround sound and sub-woofer from JBL, ABS, EBD, 6-airbags and much more.

The company will be announcing the prices of the Tata Harrier with 5-seater configuration on January 23, 2019. As Tata will be looking to keep the prices very competitive, Harrier is likely to be priced somewhere in between Rs 16 lakh to Rs 20 lakh (ex-showroom).