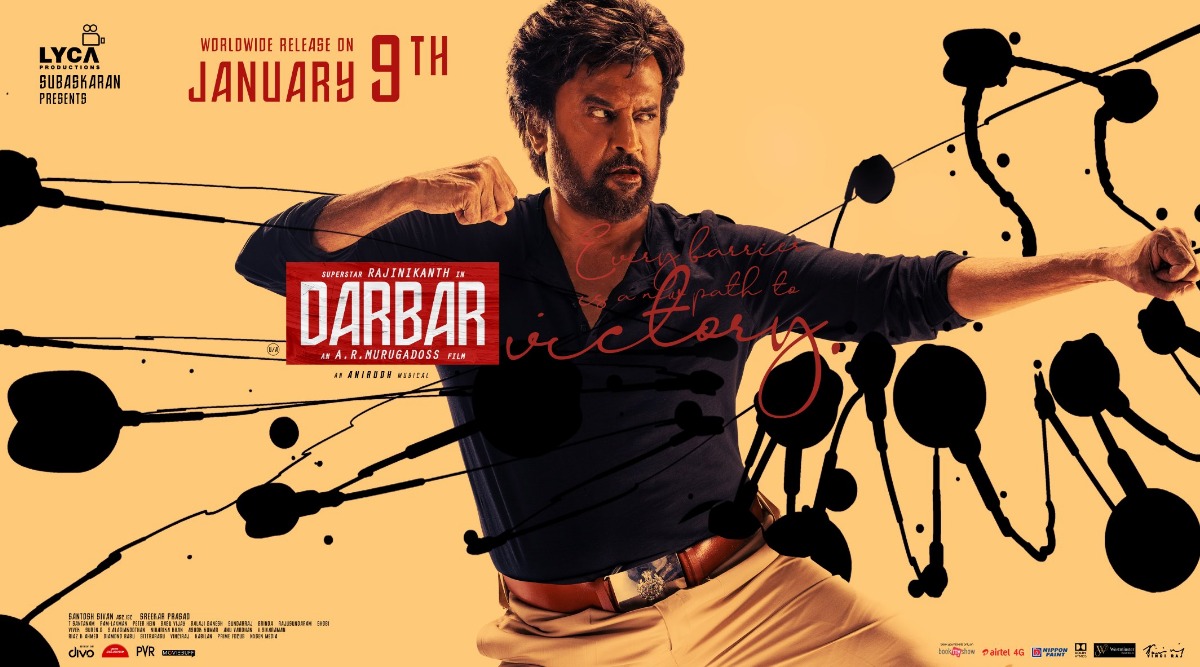 The big day is finally here! Darbar has hit the big screens and it is celebration time across the globe. Who would not want to watch first day first show (FDFS) of Rajinikanth starrer? And those who have already managed to catch FDFS of this action drama, have shared their reviews on Twitter. Fans have declared the film, directed by AR Murugadoss, as a mass entertainer. Whilst some have finished just the first half, they have still shared intriguing details about the film across social media platforms. Darbar New Poster: Rajinikanth aka Aaditya Arunachalam Says, ‘I’m A Bad Cop’.

Twitter is flooded with a variety of hashtags around Darbar. It includes #DarbarFDFS, #DarbarFromToday, #DarbarReview, and many others. This is the first film of superstar Rajinikanth to be released in 2020. Fans were eagerly waiting to watch it as it is after a gap of more than 25 years that Thalaivar has returned in the avatar of a cop. When the posters of Rajinikanth in a cop’s look, as Aaditya Arunasalam were released, there were several taglines giving a hint about his character. That included – ‘It’s Good To Be Bad’, ‘I’m A Bad Cop’, ‘Round EM Up & Take EM Down’, ‘When Terror Moves In He Comes Out’, ‘Every Barrier Is A New Path To Victory’, and many others. Let’s take a look at the reviews shared by Twitterati. Superstar Rajinikanth’s Darbar Gets U/A Certificate; Censor Board Members Ask the Team to Make 11 Changes in the Film.

It's A Thumbs Up For Darbar

#Darbar didn't have the hype kaala or kabali had, but the movie has everything a commercial potboiler needs. This is why you shouldn't overdo the promotion... Comes with limited hype and exceeds expectations. @ARMurugadoss shows his fan side as a director #DarbarReview pic.twitter.com/Qux8CgeXoT

but the rest was GRATIFYING pic.twitter.com/t7UUbq5Ilq

Darbar Is A Masterpiece

Thriller is outstanding and "Asli mein villain hu beta ye kaisa laga" is the life of movie.#Rajinikanth sir acting is on top level

A complete dominance by Superstar @rajinikanth Vintage Thalaivar Show is Back👌

Congrats to the team @LycaProductions

What a film, mind blowing.

Darbar is the film that every Thalaivar fan was eagerly waiting for so many years.

Darbar also features Lady Superstar Nayanthara opposite Rajinikanth. Also, Nivetha Thomas and Sunil Shetty are seen in key roles. The film’s music has been composed by Anirudh Ravichander. Produced under the banner of Lyca Productions, besides Tamil the film has been released in Hindi, Malayalam and Telugu as well. Stay tuned for more updates from the world of entertainment.