Bigg Boss 13: Did You Know Rashami Desai Had Once Played the Lead in a Shah Rukh Khan Movie?

Earlier we had done a story about how another BB13 contestant, Aaj Tak journalist, Shefali Bagga, has a Salman Khan connection. Now Rashami Desai has links to not just Salman Khan, but also with Shah Rukh Khan. 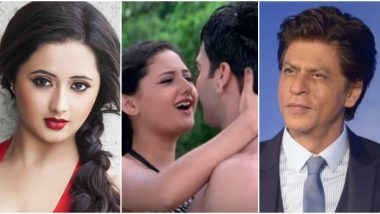 Bigg Boss 13: Did You Know Rashami Desai Had Played the Lead in a Shah Rukh Khan Movie?

The pretty Rashami Desai is quite popular among telly lovers for playing the lead in the television show, Uttaran, and later in Adhuri Kahaani Hamari. She has also been a contestant on reality shows like Jhalak Dikhhla Jaa 5, Fear Factor: Khatron Ke Khiladi and Nach Baliye 7. Now, Rashami Desai has entered as a contestant in one of India's most popular reality show, Bigg Boss, which is in its 13 the season. Whether Rashami Desai manages to stay till the end and win the trophy like last year's Dipika Kakkar, only time will tell. Rashami Desai in Bigg Boss 13: Career, Love Story, Controversies – Check Profile of BB13 Contestant on Salman Khan’s Reality TV Show.

Interestingly, Rashami Desai, who hasn't been very prolific in Bollywood, had a cameo in the Bigg Boss 13 host Salman Khan's blockbuster, Dabangg 2, in the song "Dagaabaaz Re". An even more interesting trivia here is that her Bollywood debut, which Rashami may in be no mood to talk about, had her play the lead in a Shah Rukh Khan movie!

Rashami Desai in the Dagabaaz Re song:

Before you scratch your heads figuring out which movie it is, let's put you at ease. It is a movie every ardent Shah Rukh Khan fans would rather forget ever existed - Yeh Lamhe Judaai Ke. Apart from SRK, the movie had Raveena Tandon in the lead. Or rather, that was the plan when the film started.

Yeh Lamhe Judaai Ke was launched in the early '90s when SRK was at the cusp of superstardom. After shooting for some scenes, the film was abandoned, and both SRK and Raveena never returned to reprise their roles.

Circa 2004, at a time when Shah Rukh Khan was going through a purple patch of the popularity, the makers decide to release the film to cash in on his popularity and release the film with a new title. It didn't matter then that both the lead stars hadn't completed the shoot for their portions, or for the matter, even dubbed for their characters.

So what about the incomplete portions? Here's where Rashami Desai came into the picture. The makers put in a random, separate romantic track involving newcomers, one of which was Rashami, who played the sister of the younger sister of Raveena Tandon's character. It didn't matter if they didn't share the same scene!

Rashami Desai, before she found fame on television, had gone quite bold for her Bollywood debut with her dare-bare and kissing scenes in the movie.

Check out a song from the film, featuring Rashami Desai:

Earlier we had done a story about how another BB13 contestant, Aaj Tak journalist, Shefali Bagga, has a Salman Khan connection. Now Rashami Desai has links to not just Salman Khan, but also with Shah Rukh Khan.

(The above story first appeared on LatestLY on Sep 30, 2019 04:28 PM IST. For more news and updates on politics, world, sports, entertainment and lifestyle, log on to our website latestly.com).