Manoj Bajpayee’s Dial 100 is a thriller film arriving on ZEE5 on August 6 as we take a look at the interesting OTT releases lined up for the week. Suriya, Vijay Sethupathi's Tamil web show Navrasa is another big release of the week releasing on Netflix on August 6. 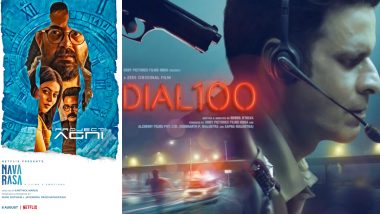 Manoj Bajpayee’s Dial 100 is a thriller film arriving on ZEE5 on August 6 as we take a look at the interesting OTT releases lined up for the week. Suriya, Vijay Sethupathi's Tamil web show Navrasa is another big release of the week releasing on Netflix on August 6. Dial 100: Director Rensil D’Silva Unveils the Chilling Story Behind Manoj Bajpayee, Neena Gupta’s Thriller.

Hollywood release The Suicide Squad heads for a theatrical release in India after theatres reopen in some states. However, James Gunn directorial is premiering on HBO Max in the USA. Here's a look at highlight films, shows and series that are scheduled to drop in the digital space this week. Dial 100 Trailer: Manoj Bajpayee, Neena Gupta And Sakshi Tanwar Promise A Pacy And Nerve-Wracking Thriller (Watch Video).

A Telugu-drama film based on middle-class true-life incidents. Bhuvi believes life has no higher purpose other than accomplishing love; Ram is a dreamer with an aspiration of becoming an author. The day doesn't take long to arrive when they have to choose between love and dreams.

Ex-leaders and a survivor of the so-called "conversion therapy" movement speak out about its harm to the LGBTQ+ community and its devastating persistence. The film earned a nomination for best documentary feature at the Tribeca Film Festival.

Supervillains Harley Quinn, Bloodsport, Peacemaker, and a collection of nutty cons at Belle Reve prison join the super-secret, super-shady Task Force X as they are dropped off at the remote, enemy-infused island of Corto Maltese.

The American comedy-drama television series follows the days and nights of a public school teacher Josh Corman, played by Gordon-Levitt in the San Fernando Valley. The series marks a return to TV for Gordon-Levitt, who grew up on the small screen with roles on multiple series, most notably his co-starring turn on the long-running NBC comedy '3rd Rock from the Sun'.

The science-fiction action series is an eight-episode thriller with a new twist on the idea of an undead army, set in the arid heat of the Mexican desert. A new breed of zombie goes off against one of the most wanted drug lords in Mexico.

This Hindi-thriller drama movie unfolds into one night where one call turns everyone's lives upside down.

(The above story first appeared on LatestLY on Aug 01, 2021 01:20 PM IST. For more news and updates on politics, world, sports, entertainment and lifestyle, log on to our website latestly.com).