Joining the #JCBKiKhudayi meme world, Nagpur City Police has come up with its unique “Judicious and Cautious use of Brakes” message, urging the citizens to drive safe. 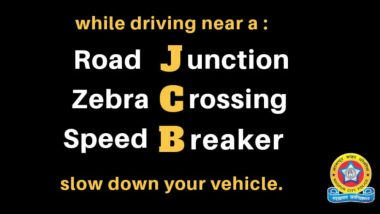 Social media is crazy and the abundance of viral memes, making any sense or sometimes absolutely nothing speaks it why. Since last night, you must have noticed a strange hashtag, dominating the top trends of Twitter-- #JCBKiKhudayi. For most of us, it took a significant amount of time, to figure out what the tag even meant and why netizens are sharing pictures of bulldozers, making memes of it. After digging onto the #JCBKiKhudayi memes a little more, it was understood the trend came from the fact that many people, especially Indians are watching videos of JCB excavator digging up the dirt, which increased the number of views to more than a million on YouTube. Now, joining the #JCBKiKhudayi meme world, Nagpur City Police has come up with its unique “Judicious and Cautious use of Brakes” message, urging the citizens to drive safe. Funny JCB Ki Khudai Memes Flood Twitter but Why Is #JCBKiKhudayi Video Going Viral and Trending in India?

Police departments in India have very well mastered to use social media meme culture to deliver their important and cautious message to the public. Seeing #JCBKiKhudayi meme going viral, it came in as no surprise to us, to see Nagpur City police putting their apt humour on point. It very well, used JCB abbreviation, to share their important drive safe memo. ‘Layega to Kohli Hi’, ICC Cricket World Cup 2019 Funny and Encouraging Memes Take Over the Internet Before Start of CWC in England.

This is what is -

It could not get any better. The #JCBKiKhudayi memes are actually about how at liberty people are to watch videos of JCB bulldozers, digging up the dirt. It is not just limited on YouTube, as we have often seen people in India usually crowd around to see these excavators doing their job.

(The above story first appeared on LatestLY on May 28, 2019 09:58 AM IST. For more news and updates on politics, world, sports, entertainment and lifestyle, log on to our website latestly.com).