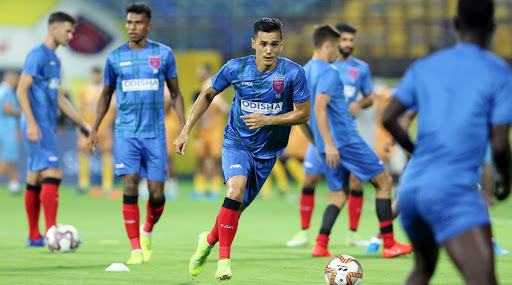 Odisha FC (ODS) will chase a third successive victory when they host Mumbai City FC (MCFC) in the 2019-20 Indian Super League (ISL) on January 11, 2020 (Saturday). Odisha FC beat Jamshedpur and Chennaiyin FC in their previous two matches and can enter the top-four with a win against Mumbai City. Fans, who play fantasy games like Dream11, can find all tips and team suggestions with player form and availability details to build a Dream11 fantasy strong team for ODS vs MCFC encounter. Odisha also ran out 4-2 comfortable winners when both these teams met earlier in ISL 6 and will aim to complete the double. Mumbai though are the only team to go unbeaten away from home this season. Meanwhile, for tips and team suggestions to build a strong Dream11 team for the ODS vs MCFC ISL encounter, please scroll down. Odisha FC Vs Mumbai City FC - Live Football Score.

Mumbai City’s four-match winning run, which included the 3-2 win over defending champions Bengaluru FC, drew to an end with the 0-2 loss against ATK. The defeat in Kolkata also ended 6-match unbeaten run in ISL 6. They are ranked 4th in ISL 2019-20 points table and can cut down the gap with the 3rd-ranked ATK with a win over Odisha FC. Their attackers have been in fine-form and Mumbai City will hope to make use of that against a tough defending side like Josep Gombau’s men.

Odisha FC, on the other, have found their scoring boots back at home. They netted 4 times in their last two matches. In 5 matches at home, they have scored 7 times and have lost once – the 0-1 defeat to title-holders Bengaluru FC – while winning three games and playing a goalless draw with ATK. Aridane Santana with 6 goals from 11 games is their top scorer and has been in fiery form as has been the diminutive Jerry Mawihmingthanga with 4 assists and 2 goals in 10 games.

Odisha FC vs Mumbai City FC, ISL 2019-20, Dream11 Team Prediction: Goalkeeper – Amrinder Singh (MCFC) should be the first-choice goalkeeper in this fantasy side.

Odisha FC vs Mumbai City FC, ISL 2019-20, Dream11 Team Prediction: Defenders – Carlos Javier Delgado (ODS) has been the main-stay in the Odisha C defence and should be the first name in defence. Narayan Das (ODS), Shubham Sarangi (ODS) and Subhasish Bose (MCFC) will be the other defenders in this fantasy team.

Odisha FC vs Mumbai City FC, ISL 2019-20, Dream11 Team Prediction: Midfielders – An all Odisha FC midfield would do great for this fantasy team. With 4 goals and 1 assist in 11 games, Xisco Hernandez (ODS) has been one of the most productive players for Odisha and is a must pick for any team. Marcos Tebar (ODS) and Jerry Mawihmingthanga (ODS) are the other players in this fantasy team.

Odisha FC vs Mumbai City FC, ISL 2019-20, Dream11 Team Prediction: Forwards – Aridane Santana (ODS) would be the first name in the attacking line-up. He has 6 goals and 1 assist from 11 games. Mohamed Larbi (MCFC) has been the chief creator for Mumbai City FC and already has 3 assists and a goal. They would be joined by Modu Sougou (MCFC) who pips Amine Chermiti into this line-up.

A win will help Odisha displace Mumbai City in the 4th position in the ISL points table. Mumbai City FC have 16 points from 11 games and finish two points away from the 3rd ranked ATK (21) with a win. Odisha from the same number of games are a point behind and will want to break into the top four.