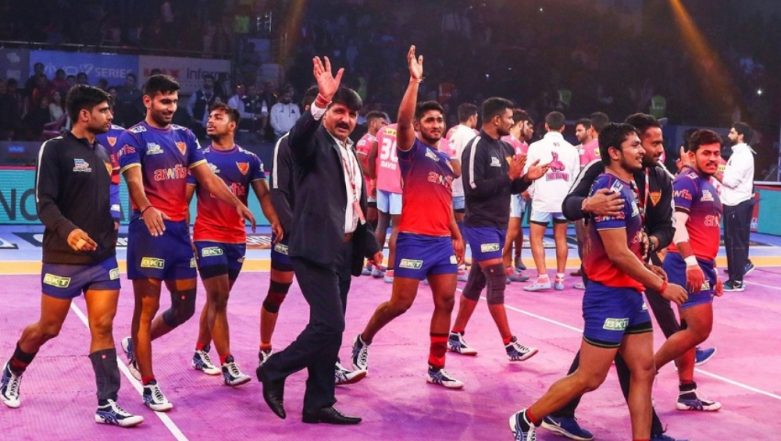 The Bengal Warriors area all set to take on Dabang Delhi in the Inter-Zone Wildcard Match on Sunday. The match will be held at the Netaji Subhash Chandra Bose Indoor Stadium in Kolkata. Dabang Delhi is placed on number three of the Zone A points table with 63 points. Whereas, Bengal Warriors are on number two of the PKL 2018 Zone B points table with 58 points. The two team met each other once in PKL 6 and it was Dabang Delhi who walked away with the last laugh as they won by a nine-point margin. Pro Kabaddi League 2018-19 Schedule Timetable: Full Fixtures, All Teams' Match Dates, Timings, and Venue Details of PKL Season 6.

The overall head-to-head record of both teams is also very interesting. Out of the 10 matches played between both teams, Bengal Warriors have won five and Dabang Delhi has won four. One of them ended with a draw. So the contest between the two teams promises to have many edge of the seat moments for the fans and will be a perfect entertainer for a Sunday evening. Now, let’s check out the streaming details of the game.

The first match of the night, on December 23, i.e. Sunday, will see the battle against Bengal Warriors vs Dabang Delhi. The contest will be played at Netaji Subhash Chandra Bose Indoor Stadium in Kolkata. The match will begin at 9.00 pm (IST).

Where to watch the Live Bengal Warriors vs Dabang Delhi, PKL 2018-19 match, on TV?

The official broadcaster of the Pro Kabaddi League Season 6 in India is Star Sports Network. The viewers will have Bengal Warriors vs Dabang Delhi, match on Star Sports 1 Hindi and Star Sports 2 channels.

The viewers to view the match via online streaming, then they can watch Star Sports’ live streaming service, i.e. Hotstar. Also, if not able to watch the match online or through live telecast, then you can read the live coverage and the latest updates of the PKL 2018-19 match by clicking here.