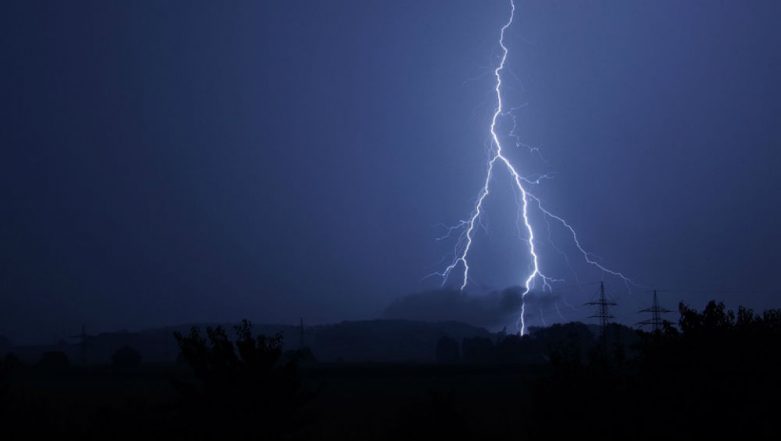 Warsaw, August 23: Four people, including two children, died on Thursday and more than 100 were injured by lightning strikes during a thunderstorm in southern Poland's Tatra mountains, and Polish Prime Minister Mateusz Morawiecki traveled there to provide support to the rescue teams.

The four fatalities in Poland come after another person died Thursday afternoon when lightning struck the Slovak side of that mountain range, which divides Poland and Slovakia, the Efe news reported. Climate Change Effect: Temperature Rises in Poland, Lithuania; Nearly 150 People Died.

"The rescue and emergency services are doing everything they can," said Morawiecki, who thanked the more than 200 police, firefighters and health care workers who were dispatched to Giewont Mountain, where the electrical storm was especially intense.

Wow! What a terrible way to die.

The search and rescue efforts will be continued until early Friday, Morawiecki said, and he did not rule out the possibility that the number of victims could rise.

Meanwhile, about 30 people who were injured in the incident were hospitalized in local medical centres, although none of them is thought to be in mortal danger.

As Poland's TVN24 television reported Thursday afternoon, a large group of tourists was hit by lightning when they were on Giewont Mountain and four of them were killed.

Giewont Mountain rises 1,894 meters (6,214 ft) above sea level, overlooking the town of Zakopane, and a metal cross is located on the peak, which is reportedly where the group of tourists were when a lightning bolt struck the cross, the current travelling along a metal railing that many of them were touching.

Lightning also affected other people in the area, one of the most popular areas in Poland for nature lovers and hikers.

One of the tourists in the area told the TV station that they did not have time to take shelter because "the storm came out of nowhere, on a day when there had not even been any clouds in the sky."

"We were hiking when we heard thunder. Someone said that it could be an airplane because nothing indicated that there was going to be a storm, but it was a storm that, immediately, came right over us," the tourist said.

The most recent tragedy of this kind in the Tatra Mountains took place in 1937, when four people were killed on Giewont Mountain by lightning during an intense thunderstorm.

Morawiecki also mentioned spelunkers who went missing last Saturday in a cave in the Tatra Mountains when a sudden rise in the underground water level cut them off from the rest of their cave-exploring group.

"It's a dramatic situation, but I want to assure you that the rescue teams are doing everything possible to locate them," the Prime Minister said.