After Alia Bhatt-Ranbir Kapoor Announce Pregnancy, Neetu Kapoor Shares Unseen Photo Of The Couple On Insta And Congratulates The Parents-To-Be

Congratulatory messages have been pouring in for Alia Bhatt and Ranbir Kapoor ever since she announced her pregnancy on social media. 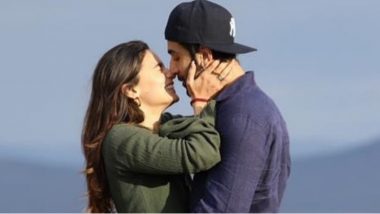 Congratulatory messages have been pouring in for Alia Bhatt and Ranbir Kapoor ever since she announced her pregnancy on social media. Big names from the industry, including the couple's close friends and family, have extended best wishes and love to the parents-to-be. And now, Ranbir's mother Neetu Kapoor has shared an adorable unseen picture of the duo. She congratulated the couple and wrote, "God bless" accompanied by a couple of red heart emojis. Alia Bhatt Pregnancy: Rishi Kapoor Gives Parenting Advice to Ranbir Kapoor, Tape Goes Viral Post Announcement (Watch Video).

In a video that went earlier this morning on Instagram, the shutterbugs can be heard congratulating the Jugjugg Jeeyo actor for her daughter-in-law's pregnancy news, to which she first gave an awkward smile to the paps. After being asked, "How is she feeling?" the Deewar actor expressed her gratitude and said, "Thank you". She gave a hilarious reaction when the paparazzi commented "Junior Kapoor on its way" on the couple's pregnancy news.

Later on, the 63-year-old actor stated, "Sabko pata chal gaya Dadi banne wali hun (Everyone got to know that I am going to be a grandmother)" to which a pap responded, "Alia ne daal diya Instagram par", the actor was then seen giving a shocking reaction.