The three-member panel, set up by Congress President Sonia Gandhi to end factionalism in the party's Punjab unit, will meet on Tuesday at 11 am to discuss certain pointers with Chief Minister Captain Amarinder Singh raised in the report. 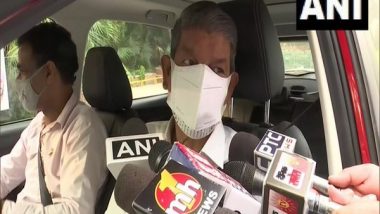 New Delhi [India], June 22 (ANI): The three-member panel, set up by Congress President Sonia Gandhi to end factionalism in the party's Punjab unit, will meet on Tuesday at 11 am to discuss certain pointers with Chief Minister Captain Amarinder Singh raised in the report.

This will be his first meeting with the panel members after they had submitted a report to party chief Sonia Gandhi. The AICC panel, which includes Mallikarjun Kharge, JP Aggarwal and Harish Rawat, has met Rahul Gandhi twice after submitting their report.

Sources close to the Chief Minister said on Sunday that the meeting is aimed at finding a solution acceptable to him concerning various issues.

"We will be meeting again at 11 am (today). On the basis of the report submitted to the Congress president, she has expressed interest in discussing certain pointers, the committee will discuss them with Captain Amarinder Singh," Rawat told reporters.

An important sticking point apparently is suitable accommodation of Navjot Singh Sidhu, with whom Capt Amarinder Singh has had differences.

Earlier in the first week of June, the Chief Minister had presented his side to the committee for three hours.

Sources said that Rahul Gandhi is monitoring the developments but the party high command has not yet opened its cards. They added that Sonia Gandhi wanted the committee to come up with a formula that is acceptable to all leaders.

The most important decision concerns that of the state Congress chief. There is also a possibility of the appointment of a Deputy Chief Minister and various election-related committees have to be finalised.

Asked about Navjot Singh Sidhu's 'two families taking advantage in Punjab' comments, Rawat said that the party would assess his statement after receiving the relevant information.

"When the matter is before Congress president, it isn't good to say anything through newspapers," he said.

On Monday, Rahul Gandhi had held meetings with leaders of the state in the national capital in an effort to bring greater cohesion in the state unit ahead of assembly elections next year and resolve factional issues and "infighting".

Punjab is crucial for Congress as it is one of the few states where the party is in power and the outcome will have an impact on the party's prospects outside the state also. The next assembly elections are scheduled to take place next year. (ANI)