Get latest articles and stories on India at LatestLY. Punjab Congress Chief Navjot Singh Sidhu on Saturday launched a fresh attack on Aam Aadmi Party (AAP) president Arvind Kejriwal for misleading people in the state stating that the latter wanted to run the state through remote control. 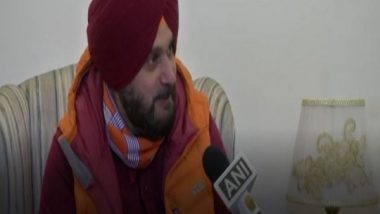 Speaking to ANI, Sidhu said, "Kejriwal always tries to mislead people here. Many leaders from his party joined Congress. The party will be swept away from Punjab this time. AAP wants to run Punjab with remote control, however, this cannot happen here."

He further asked Kejriwal to clear his stand on the "Sutlej Yamuna Link (SYL) Canal issue" and how he gave private license to liquor contractor Ponty Chadha in Delhi.

Sidhu also slammed AAP projected chief ministerial face 'Bhagwant Mann' in the ensuing Punjab Assembly elections who he said neither can hold any press conference nor give any statement without consulting Kejriwal.

Detailing Congress' roadmap for the upcoming Punjab polls, he said that while other political parties were hurling statements against each other his party's roadmap is working to help youth of the state.

"I have come up with a roadmap of Congress party which will help the youth of Punjab. I hope that this time, the people of Punjab will again give us a chance and we will form the government here," Sidhu added.

He said that has created a roadmap to benefit people and wants to convert Mohali into an Information Technology hub, Startup city, Education city and a cluster of new technology and advanced machinery.

He also stated that the Punjab model aims at 10 industrial and 13 food processing clusters.

Further, Sidhu also asserted that the party will promote skill-oriented entrepreneurship in the state.

"During this election in Punjab, we will pay more importance to employment opportunities because the employment problem has affected our three generations till now," he added.

Slamming AAP after introducing his party's roadmap, Sidhu said that now the rival party would copy the Punjab model and place it before the people of the state claiming it to be theirs.

Speaking about the CM face, the senior Congress leader said that he has full faith in the party as it will take this decision after analyzing the qualities of every leader.

"Congress will take this decision after analyzing the qualities of every leader. I have full faith in the party. We will accept the decision taken by the party high command," he added.

Punjab will go to the polls on February 20. AAP had finished second in the last assembly elections in the state. (ANI)