Get latest articles and stories on India at LatestLY. Union Finance Minister Nirmala Sitharaman will release the assessment report of the States and Union Territories under 'Business Reforms Action Plan (BRAP), 2020' in the presence of Union Commerce Minister Piyush Goyal today. 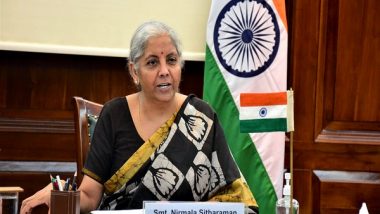 According to the Ministry of Commerce and Industry, the BRAP report includes 301 reform points that cover 15 business regulatory areas such as access to Information, single window system, labour, environment, sectoral reforms and other reforms spanning across the lifecycle of a typical business.

Department for Promotion of Industry and Internal Trade (DPIIT) has been releasing such reports since 2014 for steering business reforms to create an investor-friendly ecosystem across the country.

So far 4 editions of the assessment of have been released, and the latest edition was for the 2020 assessment.

The DPIIT has undertaken a feedback-based exercise wherein feedback was taken from businesses on the quality of implementation of the reforms carried out by the States and the UTs.

The DPIIT is the institutional anchor for the Ease of Doing Business program. It has brought in a cohesive approach by breaking the silos and working in collaboration with States and Union UTs to improve their business regulatory environment, it added. (ANI)