Kriti Sanon took to Instagram and shared a glimpse from her upcoming movie Mimi. The snap features Kriti, who will play the titular role, fangirling over Ranveer by adoring his poster. 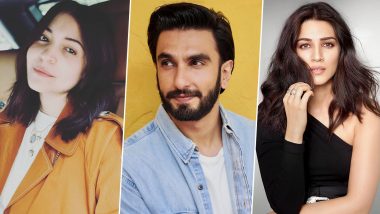 As Bollywood actor Ranveer Singh rang in his 36th birthday on Tuesday, heartfelt wishes poured in from his industry friends on social media. Kriti Sanon took to Instagram and shared a glimpse from her upcoming movie 'Mimi'. The snap features Kriti, who will play the titular role, fangirling over Ranveer by adoring his poster. She captioned the picture as, "Dear Ranveer Singh, You are Mimi's FAVOURITE! And Mine too Wish you a very happy birthday!! @ranveersingh From Mimi and Me#HappyBirthdayRanveerSingh #Mimi." Rocky Aur Rani: Legends Dharmendra, Jaya Bachchan, Shabana Azmi Join Ranveer Singh, Alia Bhatt in Karan Johar’s Directorial (Watch Video).

Anushka Sharma posted a picture of her 'Band Baja Baaraat' co-star and wrote, "Happy birthday Ranveer. May you continue to spread happiness and good vibes! Have a fantastic year." The two starred together in Ranveer's debut film 'Band Baja Baaraat' in 2010 and reportedly dated for a short while after the film. It was Anushka's second film after she made her debut with the 2008 hit movie 'Rab Ne Bana Di Jodi' co-starring Shah Rukh Khan. Ranveer Singh Birthday: Fans Flood Twitter With Wishes for the Superstar (View Tweets).

Taking to his Instagram Stories, Vicky Kaushal shared a solo picture of Ranveer and wrote, "Happy Birthday Champ!" 'Gully Boy' director Zoya Akhtar also wished him "way before it becomes mainstream" as she posted a quirky picture of a cute girl, showcasing her stylish avatar, for which Ranveer is also famous! "Kiss Hug Love Ranveer. May you stay unstoppable," she wrote in her Instagram story. Veteran star Madhuri Dixit also dug out a throwback picture featuring herself shaking a leg with Ranveer.

Alongside the picture, she wrote, "Happy birthday to the mighty force of talent and entertainment Ranveer. Wishing you the best with everything." Tiger Shroff posted a throwback picture of the birthday boy that shows the 'Padmaavat' actor clicking a selfie with Tiger, who is seen sleeping next to him in an airplane. Alongside the picture, he wrote, "How can you not be a fan of this guy?! Happy birthday @ranveersingh wish u the best of health happiness and success always!" 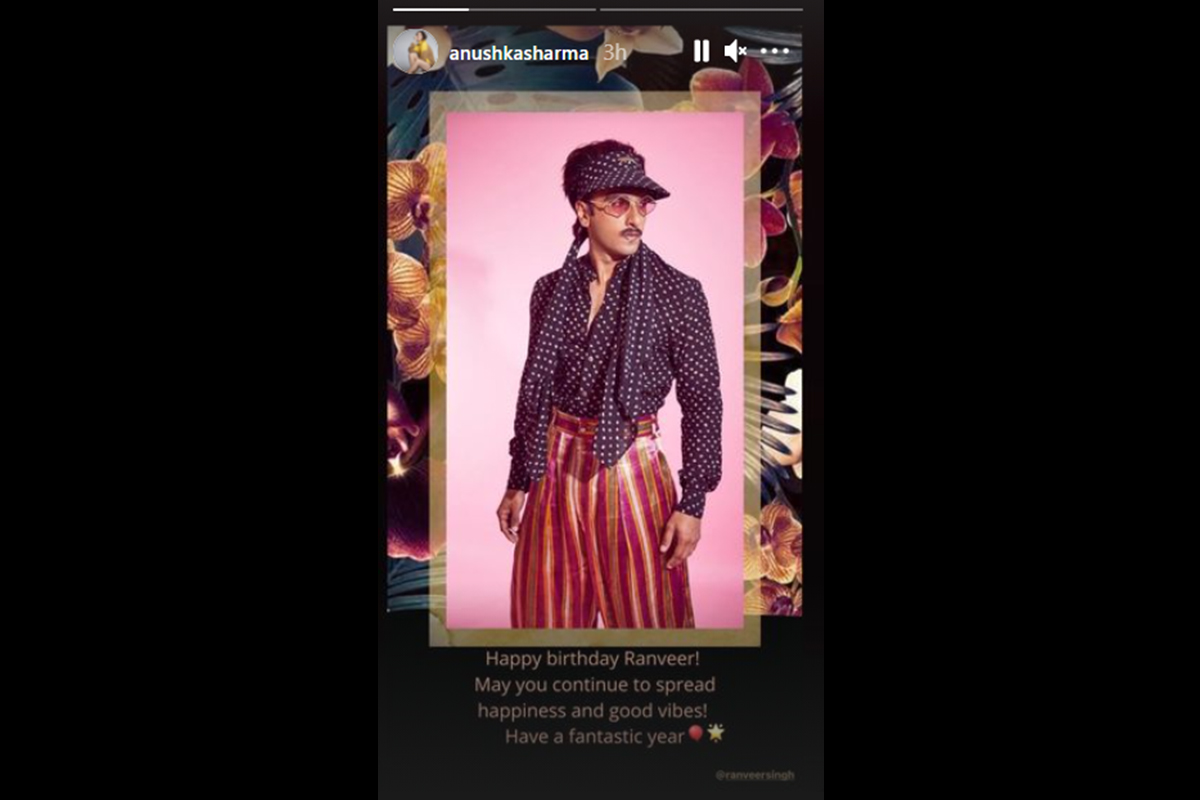 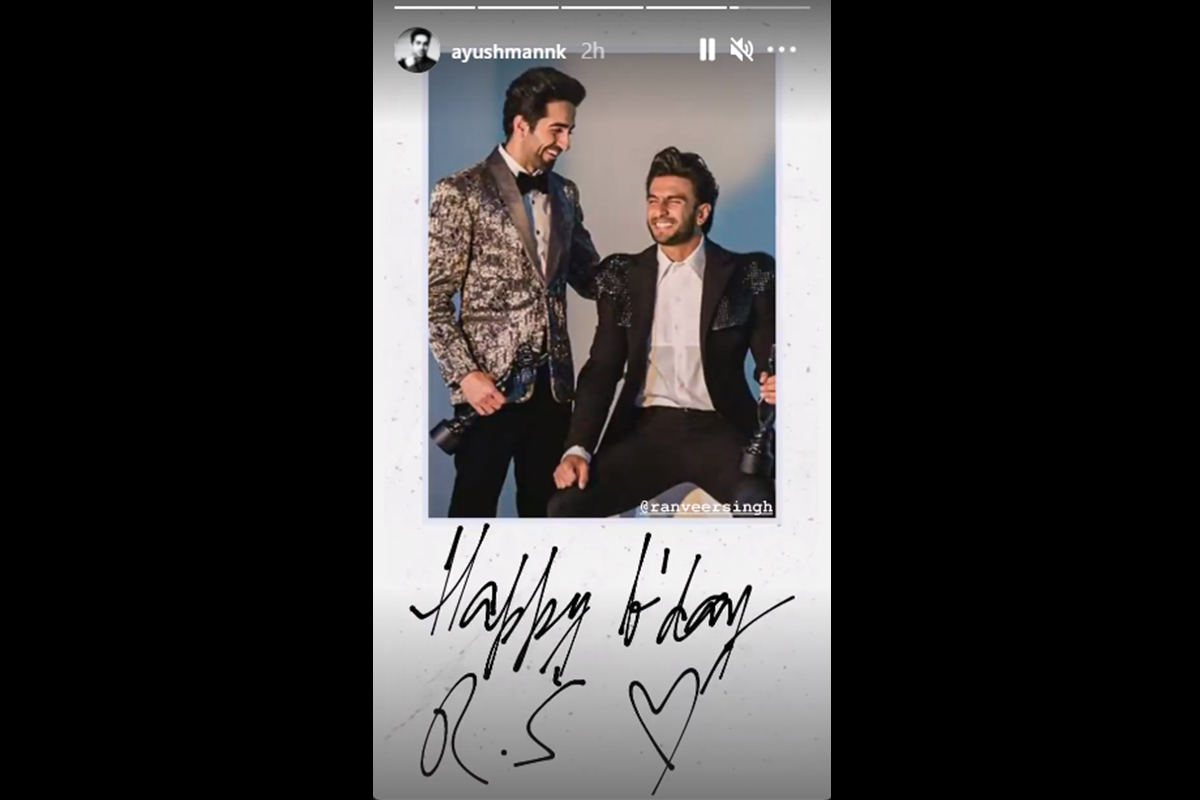 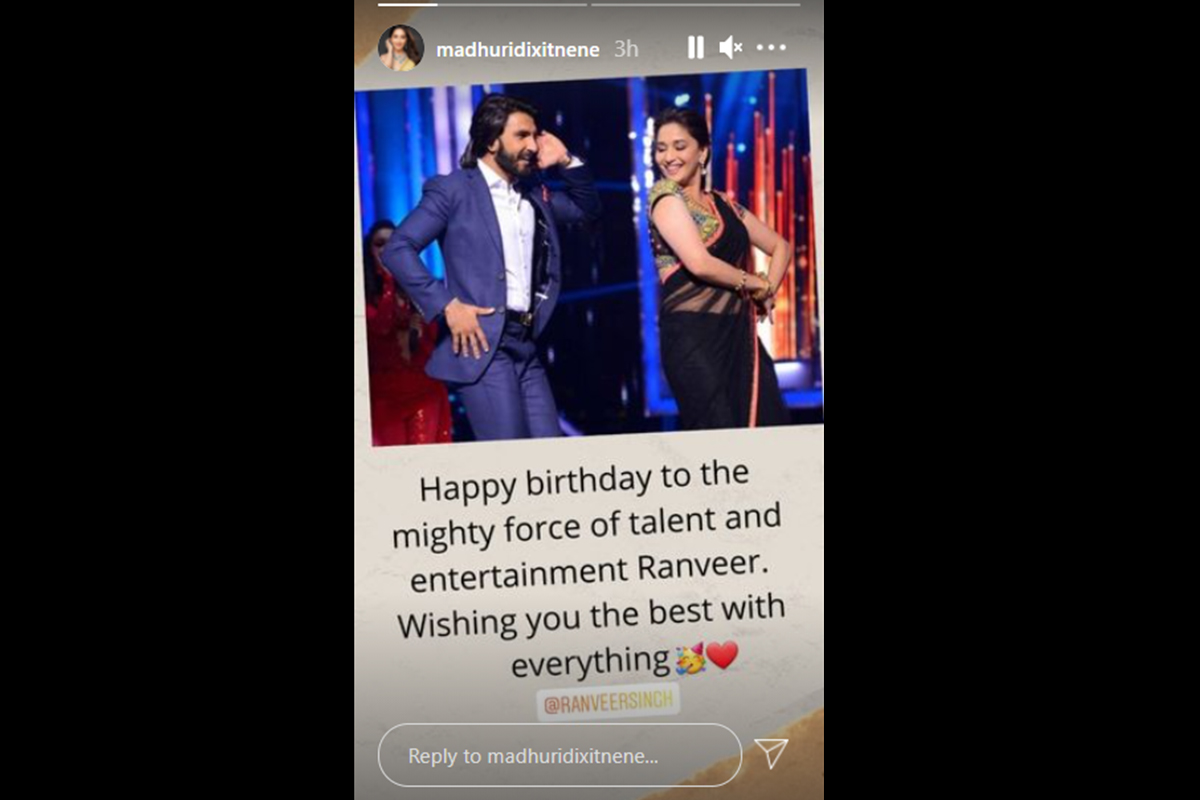 Other stars like Bhumi Pednekar, Jacqueline Fernandez, Ananya Panday, Ayushmann Khurrana and more also extended birthday greetings to him on social media. Meanwhile, on the work front, Ranveer Singh who has treated his fans with some powerful performances in movies, is all set to make his TV debut by hosting Colors' quiz show 'The Big Picture'. Apart from this, the actor will be seen in movies like '83', 'Sooryavanshi', 'Jayeshbhai Jordaar', 'Cirkus', and the Hindi remake of blockbuster hit 'Anniyan'. Giving a treat to Ranveer's fans on his birthday, filmmaker Karan Johar announced his next directorial venture titled 'Rocky Aur Rani Ki Prem Kahani' starring the birthday boy with his 'Gully Boy' co-star Alia Bhatt.