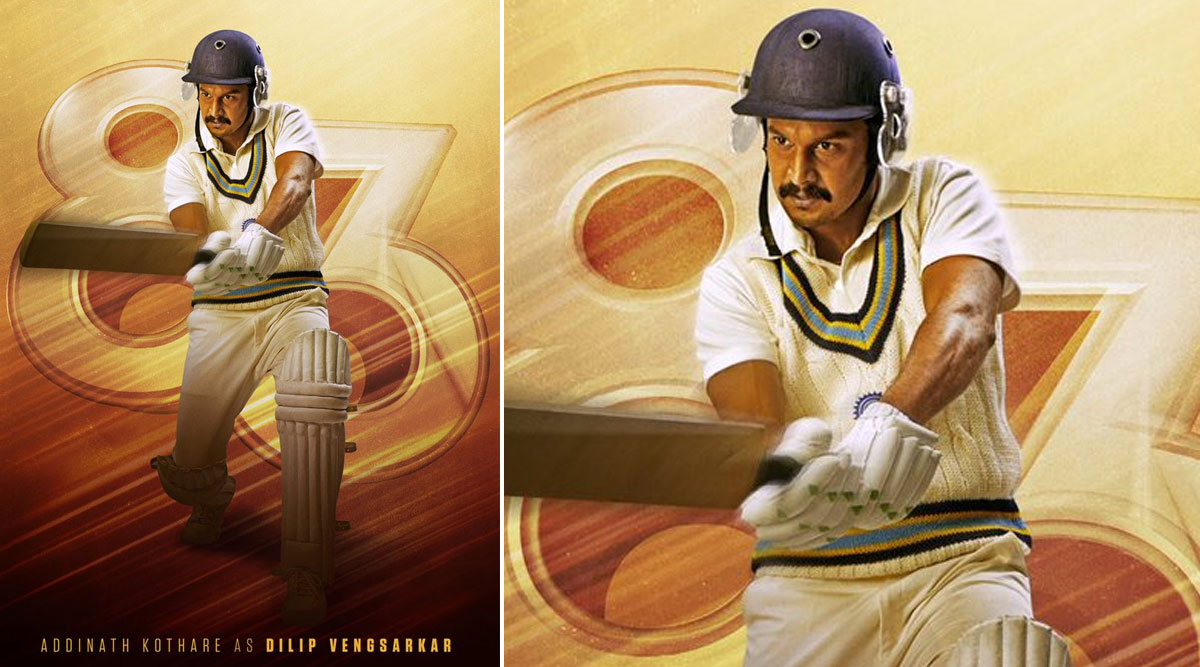 The excitement for Kabir Khan's '83 is reaching new heights thanks to the amazing character posters that are being dropped by the makers. It is amazing to see the squad members one by one with Ranveer Singh's Kapil Dev leading them as captain. Till now, we have seen the character posters for actors Saqib Saleem, Tahir Raj Bhasin, Harrdy Sandhu, Jatin Sarna, Jiiva, Chirag Patil, Ammy Virk. The newest one to join the lot is Adinath Kothare as Dilip Vengsarkar. On the poster, the popular Marathi actor can be seen in a batting stance. 83 The Film: Meet Harrdy Sandhu as Indian Cricket Team's Dynamic Bowler Madan Lal (See Pic).

Dilip Vengsarkar was a key contributor in the 1983 world-cup winning squad. The batsman was regarded as one of the foremost exponents of the drive. He was also known by the nickname 'Colonel' by the bowlers. Vengsarkar had a prominent 16 year-career in cricket and is one of the most respected players. It will be interesting to see how Adinath manages to ape Vengsarkar's batting form in the film. Sharing the poster, Ranveer wrote, "THE COLONEL !!! The finest exponent of the drive and the finest gentleman cricketer. Presenting @adinathkothare as DILIP VENGSARKAR."

The film will revolve around Kapil Dev's journey as the Indian captain of the world-cup winning squad and also the iconic win for the country as they lifted their first-ever world-cup. The film also stars Pankaj Tripathi in the role of the team's manager. 83 The Film: Ranveer Singh Releases Sahil Khattar's Character Poster as Syed Kirmani (View Pic).

Directed by Kabir Khan, the film also stars Deepika Padukone as Kapil Dev's wife. '83 is all set to hit the screens on April 10, 2020 and we can't wait to get a glimpse of the teaser soon!