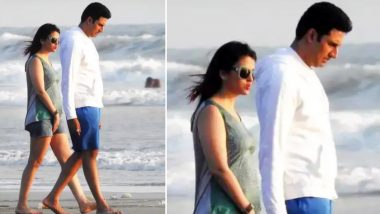 Mumbai, March 23: A photograph of Aishwarya Rai Bachchan doing the rounds on social media has made fans speculate that the actress and former Miss World may be pregnant with her second child.

The Goan Everyday photographed Aishwarya strolling bare foot on a beach with actor and husband Abhishek Bachchan and was wearing a white shirt and a pair of shorts. Looking at her bulging stomach, a couple of Twitter users felt Aishwarya was pregnant with her second child. Aishwarya Rai Bachchan's 'Big Mama' Avatar Will Ruin Your Good Night Sleep! View Pics.

A social media user asked if the actress was pregnant. Another replied: "No she's not".

An excited fan tweeted: "I am also waiting Aish to having one more baby."

Aishwarya married Abhishek in 2007. They welcomed their first child, Aaradhya, a daughter, in 2011.

Aishwarya was last seen on screen in the 2018 film "Fanney Khan".

(The above story first appeared on LatestLY on Mar 23, 2019 07:51 PM IST. For more news and updates on politics, world, sports, entertainment and lifestyle, log on to our website latestly.com).