Not Salman Khan But These Two Actors Were the Original Choice for Chulbul Panday's Character in Dabangg - Guess Who?

While we believe the iconic character of Chulbul Panday was written keeping Salman Khan in mind, you will be shocked to know that it wasn't the case. Director Abhinav Kashyap preferred two other actors before him and it was only after Arbaaz Khan's suggestion that the Wanted actor was roped in. 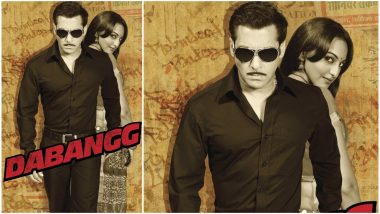 Salman Khan was not the first choice for Dabangg (Photo Credits: Instagram)

Chulbul Panday today is synonymous with Salman Khan - a character that we believe was written keeping him in mind. After a smashing success of Prabhudeva's Wanted, he seemed like the only perfect choice for Abhinav Kashyap's cop drama that had blockbuster written all over it. It was in 2010 when Abhivan narrated the script to Arbaaz Khan and wanted him to play 'Makkhi's' character. Interestingly the filmmaker hadn't even approached Salman Khan till then. He always wanted Randeep Hooda or Irrfan Khan to essay the role of Chulbul Panday. Malaika Arora Confirms That She Is Not A Part Of Salman Khan's Dabangg 3.

We do know how ironic this sounds but Salman was never the first choice to play this iconic character in the Dabangg series. Revealing the details of the same, Arbaaz in his interaction with Mumbai Mirror said, "When Abhinav narrated the script to me, I asked him why he wasn't offering me the role of the Robin Hood cop. But more than Chulbul, he saw me as Makkhi, which was an extension of my role in Jaane Tu... Ya Jaane Na. He was looking to cast Randeep Hooda or Irrfan Khan as the lead then but neither of them was finalised." Insane! Massive Crowd Gathers In Phaltan As Salman Khan Arrives To Shoot For Dabangg 3 - Watch Videos.

However, Arbaaz Khan was in love with the script so much so that he decided to produce it instead. And it was only after Khan was roped in as the producer that he suggested Salman Khan should play the lead. "I offered to produce the film for him and asked him what if we got Salman on board as Pandey ji. He was instantly excited and things quickly fell in place," he added.

With names like Randeep and Irrfan coming in the picture, we wonder if they would have justified the role as well as Salman Khan! A character that we still believe was etched for him and him only.

(The above story first appeared on LatestLY on Jul 23, 2019 08:50 AM IST. For more news and updates on politics, world, sports, entertainment and lifestyle, log on to our website latestly.com).