Dimple Kapadia on Christopher Nolan's Tenet: I Have to See It Three Times More to Completely Understand 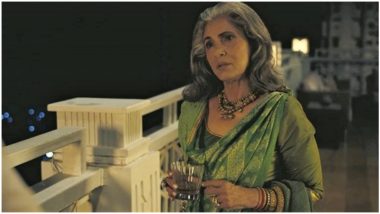 New Delhi, Nov 27: Working on director Christopher Nolan's “Tenet” was a life-changing experience and felt like a beautiful dream, says veteran actor Dimple Kapadia about her highly-anticipated role in the Hollywood espionage thriller. Nolan, best known for his high concept, big-budget movies such as "The Dark Knight" series, "The Prestige", "Inception" and "Interstellar", had generated a lot of buzz with his decision to cast the Bollywood star in the movie, which was partially shot in Mumbai. Dimple Kapadia on Working in Christopher Nolan’s Tenet: It Has Made Me More Confident, Wanting to Do Better Roles.

Kapadia admits that she was under a lot of "pressure" before the shoot. Tenet: Twinkle Khanna 'Finally' Watches Mom Dimple Kapadia's Film Directed by Christopher Nolan (Read Tweet).

"Honestly, I was under so much pressure of my own while doing it. I was so tense that I couldn't really appreciate or enjoy what was going on. If I think about it now, it was a beautiful dream for me,” Kapadia told PTI in a Telephonic interview from Mumbai.

The 63-year-old actor, who started her journey in the movie as a teenager with the late Rishi Kapoor in 1973's "Bobby" and worked in hits such as "Saagar", "Janbaaz", "Ram Lakhan", "Prahar", "Gardish" and "Dil Chahta Hai", says post "Tenet", she is looking for more meaningful work.

Kapadia, who has an Oracle-like presence as arms dealer Priya Singh in the movie, said Nolan made things easy for actors.

"It was so fantastic and unbelievably easy to slip into (the role). He (Nolan) made it so easy for me to get into it. It was a dream world and I wish I could get that better."

"Tenet", which was originally scheduled to release worldwide in June this year, comes to India after a delay of over six months. The film saw staggered release in countries like the US and the UK.

Like most of Nolan's film, “Tenet” has a high concept, the mind-bending story at its centre. Kapadia said when she read the film's script, she couldn't "fathom" what Nolan was trying to say with it.

"I was locked up in my vanity van for four hours, it took me that much time to read. When I read the first 20-30 pages, I didn't know what I was reading. I'm an avid reader but I just couldn't fathom where I was.

"Even after finishing it, I got the gist of it but still couldn't fathom what he was trying to exactly say. So I was really looking forward to seeing how he's going to translate it all into cinema as that would be the exciting part of it."

But it was Nolan's filmmaking process and confidence in himself and his actors that left Kapadia completely awestruck.

"Once I finished a very long scene and at the end of it, there was just a voiceover for two lines. So, I didn't really pay much attention to it as it was a voiceover. I got back to my work and finished the day but later realised what those two lines actually meant," she recalled. The actor said when she got back on the set next day, she requested Nolan whether she could repeat those lines.

"He says, 'No. I was convinced'. So that's his process. He's got it all in his head and what you need to do is to just appear and do your best because it is already all there in his mind, how he sees it all and he wants it to be done," she said.

Nolan and his cinematographer Hoyte van Hoytema shot the movie in countries like Denmark, Estonia, Italy, Norway, the UK and the US as well as India, where the crew came down for a five-day shoot in Mumbai.

Filming took place in areas like Breach Candy Hospital, Cafe Mondegar, Colaba Causeway, Colaba Market, Gateway of India, Grant Road, Royal Bombay Yacht Club, and the Taj Mahal Palace Hotel. "It was all so fabulous. Suddenly, I felt like I was the Maharani of India and the guests have come and it is my duty to take care for them, make India proud and show them what all was good about the country. It was a wonderful feeling," Kapadia recalled.

"Tenet", Kapadia said, is a film designed for the big screen experience but at the same time, she also wants people to not let guard down. "My only desire for the film is that people should actually enjoy it in theatres. I know these are trying times but this film is made for the big screen. It is absolutely fantastic and unbelievable. You have to see it to believe it. At the same time, people should take complete care."