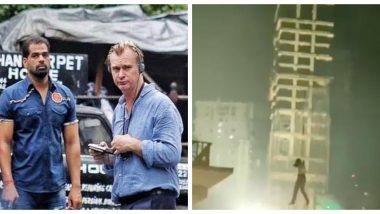 Christopher Nolan is currently in India and shooting for his upcoming film Tenet in Mumbai. We already saw pictures of the crew prepping up at the Gateway of India on September 16. Actors Dimple Kapadia and Robert Pattinson were also spotted on the sets on Tuesday and fans are super thrilled about it. Pictures have been doing the rounds on social media and it looks like the espionage thriller will have some interesting scenes shot in Mumbai. If the earlier pictures were any less exciting, now we have found a video where a high-rise stunt was being shot for the film.Tenet: Robert Pattinson and Dimple Kapadia Begin Mumbai Shoot for the Christopher Nolan Film - See Pictures.

The latest round of videos that are being shared on social media, show a stuntman jumping from a high-rise building in Grant Road. Of course, we don't know if this stunt will be for Robert's character or not. Sharing a video on Twitter, one of the users wrote, "WOW... It's going to be epic!!" Nolan and his crew are on a ten-day shoot schedule in Mumbai. A few portions have already also been shot at the busy street of Colaba Causeway.

Check Out the Stunt Video Here:

Here's Another Video from the Sets:

imaging seeing this scene in the movie with Rob & John... https://t.co/zkwYxUiroJ #TENET pic.twitter.com/GM0Ra2M8Rc

Tenet also stars Elizabeth Debicki, Dimple Kapadia, Aaron Taylor-Johnson, Clémence Poésy, Michael Caine, Kenneth Branagh, and Himesh Patel in lead roles. This is Robert Pattinson's first collaboration with Nolan and the actor's fans are super excited about this project considering this could turn out to be a landmark film in his career.  Tenet: Christopher Nolan and Robert Pattinson Arrive In Mumbai! View Pics Inside.

Tenet began its shoot in Estonia. A few portions of the film were also shot in UK and now India. The action drama is slated to hit the screens in July 2020.

(The above story first appeared on LatestLY on Sep 18, 2019 10:20 PM IST. For more news and updates on politics, world, sports, entertainment and lifestyle, log on to our website latestly.com).