According to TMZ, multiple sources connected to the family have confirmed the hospitalisation was a result of pancreas inflammation which includes symptoms like nausea, intense stomach pain and vomiting. 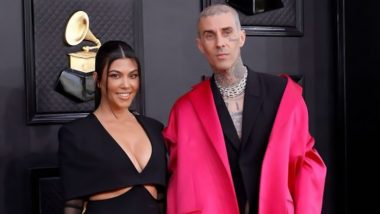 The reason behind Blink-182 drummer Travis Barker being admitted to a hospital following an "undisclosed" medical condition is now reported to be pancreatitis, which in doctors' opinion has been triggered by a colonoscopy, reports Variety. According to TMZ, multiple sources connected to the family have confirmed the hospitalisation was a result of pancreas inflammation which includes symptoms like nausea, intense stomach pain and vomiting. There are no details as to when Barker had the colonoscopy, but 'TMZ' reports it was "recent." Travis Barker Health Update: Blink-182 Drummer Hospitalised For Pancreatitis After Undergoing Colonoscopy.

The 46-year-old and husband to Kourtney Kardashian was rushed to Cedars-Sinai Medical Centre for further care after first checking into West Hills Hospital and Medical Centre on Tuesday. Variety further states that Barker's medical history involves illnesses like staph infection and cellulitis, which is a bacterial infection that can cause swelling, inflammation and pain. In 2018, he suffered blood clots in his arms, forcing a string of shows from Blink-182's Las Vegas residency to be canceled. Travis Barker Rushed to a Hospital Due to Undisclosed Medical Condition.

Moreover, in 2008, Barker endured the traumatic experience of a plane crash that claimed the lives of six people; he previously opened up about how the accident left him with third-degree burns all over his body. For nearly three decades, Barker has been a pillar of the music industry. His most recent collaborations include Machine Gun Kelly and Post Malone.

(The above story first appeared on LatestLY on Jun 30, 2022 02:49 PM IST. For more news and updates on politics, world, sports, entertainment and lifestyle, log on to our website latestly.com).