Priyanka Chopra seen with Nick Jonas and his brothers. 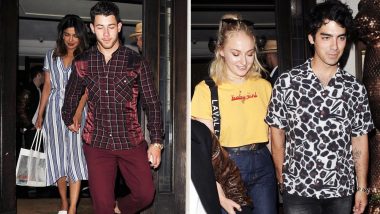 Ahead of her birthday, Priyanka Chopra was spotted on a date with boyfriend Nick Jonas in London. What caught our fancy was that Priyanka and Nick weren't alone. The couple went out on a dinner date with Joe Jonas and Sophie Turner last night. Kevin Jonas too was spotted with the couple last night at the restaurant. The pictures of them coming out of 34 Restaurant in Mayfair, London are all over the internet and fans cannot simply contain their excitement.

PeeCee and Nick have been spotted together several times going out on dates. Not just that, the duo has been spending quite some time with each other's families which has got fans wondering if the couple is taking their relationship to the next level. If you remember just a couple of months back, PC met Nick's family in New Jersey and weeks after that, he accompanied her to India where he met her mother. No wonder fans are rooting for this couple to get married by the end of this year.

Rumours also suggest that Priyanka and Nick might get engaged soon. Neither of them has confirmed the news yet, but we all know that there is no smoke without fire! Besides, considering how fast they are moving in this relationship, it is likely that they might end up getting hitched.

On the work front, Priyanka will be next seen in Ali Abbas Zafar's directorial, Bharat. She has also signed Shloka Mehta's next titled The Sky Is Pink.

(The above story first appeared on LatestLY on Jul 17, 2018 05:00 PM IST. For more news and updates on politics, world, sports, entertainment and lifestyle, log on to our website latestly.com).