Priyanka Chopra and Nick Jonas to Get Officially Engaged In July, This Year? 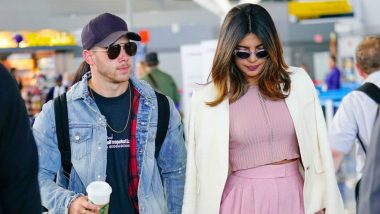 There's a lot of happening between Priyanka Chopra and Nick Jonas. The couple has been getting constantly spotted in US and now in India. Their mushy hand-in-hand appearances are almost confirming their relationship in public. Now yet again, there are new rumors on the board. So, the hottest couple in the town is reportedly getting engaged during July end or early August.

It all apparently happened when PeeCee and Nick arrived to India to catch up with the family and friends of the Bollywood actress. Things have probably turned out fruitful which is why the rumors of their engagement are on now. There has been no confirmation on any of their relationship speculations all of now but then there would be no smoke without fire, right?

The duo met Nick's family during a function at New Jersey to take things further. Then, Nick too followed the suit and came along with Priyanka Chopra to meet her mom and her friends. In fact, both the stars were recently seen sharing same finger rings that are apparently called as 'promise rings'. So, while all of this is pretty evident to the netizens, how can they not root for the couple?

On the work front, Priyanka will be next seen in Ali Abbas Zafar's directorial, Bharat. the film also stars Salman Khan and Disha Patani. This will be for the third time that the Dabangg Khan and desi girl will share screen space after Mujhse Shaadi Karogi, God Tussi Great Ho and Salaam-e-Ishq. Well, looks like we are in for another major shaadi in the town apart from Ranveer Singh and Deepika Padukone, Alia Bhatt and Ranbir Kapoor.

(The above story first appeared on LatestLY on Jun 27, 2018 09:13 AM IST. For more news and updates on politics, world, sports, entertainment and lifestyle, log on to our website latestly.com).