Gyanvapi Masjid Row: Security Beefed Up in Varanasi Ahead of Case Hearing in District Court

Security has been beefed up in Varanasi as the court of district judge is set to start hearing of Gyanvapi-Shringar Gauri case from Monday. 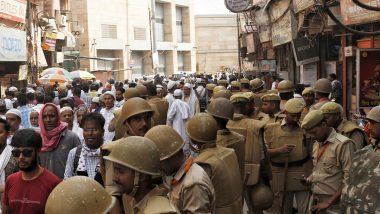 Varanasi, May 23:  Security has been beefed up in Varanasi as the court of district judge is set to start hearing of Gyanvapi-Shringar Gauri case from Monday.

All the related files were transferred to it in compliance with the Supreme Court's May 20 order of shifting the trial from civil judge (senior division) court. Gyanvapi Masjid Controversy: Friday Prayers Offered at Mosque in Varanasi With Least Number of People

District government counsel (civil) Mahendra Prasad Pandey said the district judge court will on Monday make clear the points on which the hearing would start.

Meanwhile, senior police officials, on Monday, said that adequate security arrangements had been made to ensure that there was no trouble from any side over the hearing of the case.

"We have deployed adequate forces and barricades have been put up as precautionary measure," said a senior official.

Five women devotees, Rakhi Singh of Delhi, Laxmi Devi, Sita Sahu, Manju Vyas and Rekha Pathak, all of Varanasi, had on April 18, 2021 filed a petition seeking daily worship of goddess Shringar Gauri on the mosque premises, in the court of civil judge.

The court commission had started the survey of Gyanvapi on May 6, but it was stalled the next day due to protest by AIM, which also demanded the civil judge (senior division) court to change the advocate commissioner saying Mishra was biased.

The court commission resumed the survey on May 14 and concluded it on May 16 amid claims of a 'Shivling' being found in the wuzu pond of Gyanvapi by the petitioners.

On May 17, the court sacked Mishra following complaints of leaking information and asked special advocate commissioner Vishal Singh to table the survey report on May 19.

On May 20, while hearing the petition of AIM Committee, the Supreme Court refused to interfere with the survey order passed in the Gyanvapi mosque case and transferred the civil suit filed by Hindu devotees from civil judge (senior division) to the district judge, Varanasi saying looking at the 'complexities' and 'sensitivity' of the issue, it is better if a senior judicial officer having experience of over 25-30 years handles this case.

(The above story first appeared on LatestLY on May 23, 2022 10:17 AM IST. For more news and updates on politics, world, sports, entertainment and lifestyle, log on to our website latestly.com).