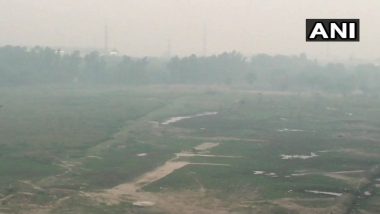 New Delhi, March 11: Greater Noida in Uttar Pradesh, over 60 km from the national capital, recorded the most polluted air in the northern region on Thursday afternoon, according to the data from the Central Pollution Control Board (CPCB).

According to the Ministry of Earth Sciences' System of Air Quality and Weather Forecasting and Research, the AQI is likely to stay in the poor to moderate category for the next two days in Delhi.

"Surface winds are calm. Thunderstorms with gusty winds and local dust lifting are likely at isolated places today and tomorrow. An increase in wind speed and ventilation is expected on the 12th March," it stated.

Out of 39 pollution monitoring stations in the capital city, the one in Dwarka recorded the highest AQI at 309, followed by NSIT at 301, Bawana at 300 microgram per cubic meter.

The officials have advised sensitive people to consider reducing prolonged or heavy exertion and take it easy if symptoms such as coughing or shortness of breath occur.

(The above story first appeared on LatestLY on Mar 11, 2021 04:29 PM IST. For more news and updates on politics, world, sports, entertainment and lifestyle, log on to our website latestly.com).