Ahead of Diwali, the Delhi government too had imposed a total ban on firecrackers, including the environmentally safer green crackers, from November 7-30 to combat rising air pollution amid an increasing number of COVID-19 cases in the city. 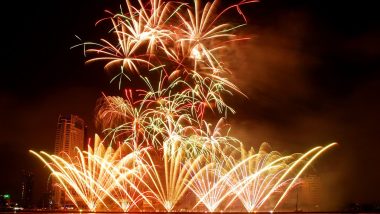 The incidents include a fire at a godown in west Delhi's Mundka in which a 28-year-old man was killed while another was injured, they said.

"We received 205 fire-related calls till Diwali midnight and only two calls were specifically related to firecracker bursting while most of the calls were about the blaze in open areas or dump yards," Delhi Fire Service Director Atul Garg said.

Of the total calls received, 129 were handled by the fire service department's control room during the peak hours (from 6 pm to 11.58 pm), the time when people usually lit diyas after puja and burst firecrackers. Delhi-NCR, Punjab, Haryana and Uttar Pradesh May Witness Rainfall Today, Air Quality in National Capital Likely to Improve, Says IMD.

Despite a complete ban on the usage of all kinds of firecrackers, Garg said "we responded to 205 calls this year on Diwali which is slightly less as compared to the last year."

"It could be due to imposition of a complete ban but people were still found bursting firecrackers and most of the garbage dumps that caught fire are also due to fireworks," he said. Last year, the fire department had received 245 calls related to fire incidents on Diwali, the officer said.

Ahead of Diwali, the Delhi government too had imposed a total ban on firecrackers, including the environmentally safer green crackers, from November 7-30 to combat rising air pollution amid an increasing number of COVID-19 cases in the city. Ambulance Services in Delhi Get Around 24,000 Calls Since Fresh Surge in COVID-19 Cases in National Capital: Report.

Out of the 205 calls received on this Diwali, 175 were related to fire while the remaining were related to other requirements, including assistance for rescuing birds and animals, the senior fire official said.

Only two of the 175 calls were related to fire due to bursting of firecrackers, while 71 calls were related to fire at dump yards or open areas, including the fire at a cooler-cum-wood godown in Mundka area on Saturday night, he said. The injured and the deceased were identified as Aditya, 20, and Sunil Kumar, 28, respectively. Both were residents of Ayodhya in Uttar Pradesh, the police official said. The official suspects that Kumar was sleeping inside the godown when the fire broke out.

"A call about the fire was received at around 11.05 pm and 12 fire tenders were rushed to the spot," Garg said. The charred body was recovered from inside the godown, he said. The fire was eventually brought under control but what led to the blaze is not known yet, he added.

The Delhi Fire Service had deployed 2,500 personnel to deal with any emergency on the occasion. Also, fire tenders were deployed at 24 locations across the city from 5 pm to midnight on both the days, the official said.

Besides, motorcycles with fire fighting equipment and high-pressure pumps were also deployed to douse the fire on the streets and narrow lanes.