Several states from North, West and South India are witnessing a sporadic rise in the cases of Avian Influenza (bird flu). States like Himachal Pradesh, Rajasthan, Madhya Pradesh and Kerala have reported close to 25,000 deaths predominantly of ducks, crows and migratory birds. 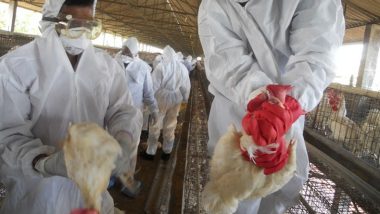 The news has started to trigger panic among the public. The people, still fear-struck with the Covid-19 infection, are afraid that the bird flu, which is also a viral disease, may turn into an epidemic. However, the health experts have negated such a possibility and advised the public to take precaution and not panic. Bird Flu Scare: Sale of Chicken, Egg, Fish Banned in Parts of Himachal Pradesh's Kangra District.

The doctors said that the risk of human-to-human transmission of the H5N1 virus that causes the bird flu is very rare unless one works in proximity with the infected species of birds.

"People who work closely with poultry are at high risk of getting the infection. Otherwise, human to human transmission of the H5N1 virus is very rare. Hence there is no need to panic," Dr. Harshal R. Salve, Associate Professor at Centre for Community Medicine, All India Institute of Medical Sciences (AIIMS) told IANS.

"The bird flu is detected in sick birds and has the possibility to spread among humans only with those handling poultry or infected birds," said Dr. Rajeev Gupta, Director- Internal Medicine, Max Super Speciality Hospital, Shalimar Bagh (Delhi).

Meanwhile, the public has started to ditch eggs and chicken meat in fear that it might carry the H5N1 virus and could infect the ones who would consume it. While there is no connection between the spread of Avian Influenza and consumption of eggs, the doctors suggested ditching undercooked poultry products and meat for a while to allay the fear.

"There is no evidence available that suggests the spread of bird flu through eating meat or eggs. Nonetheless, eating raw meat and eggs should be avoided in the affected region till the incidents come down," advised Dr. Salve.

He goes on to add that the public should not let their guards down and continue to follow the safe and hygienic practices adopted amid the pandemic to steer clear from any possibility of encountering the H5N1 virus.

Dr. Nanda said that it is anyway not advised to eat semi-cooked meat and eggs. "People can also take extra precaution besides properly cooking the meat and poultry," she added.

"Wash your hands with warm water and soap, especially before and after handling the raw poultry and eggs. Use different utensils for cooking raw meat and make sure meat is cooked properly until steaming hot. Avoid direct contact with live and poultry birds," Dr Nanda advised.

She also suggested avoiding visiting live animal markets or poultry farms for now. "If need be, wear a mask and gloves all the time. Also, do not go near or touch bird droppings or sick and dead birds," Dr. Nanda added.

The bird flu is not yet detected in the poultry birds. The National Institute of High Security Animal Diseases, where samples of animals sent across India for detection of diseases, told IANS that it has not found the presence of the H5N1 virus in the poultry birds yet.

The president of Ghazipur Mandi, biggest poultry market in the national capital, also informed IANS that no incidence of the bird flu among chicken meat has been reported in the market as yet.

(The above story first appeared on LatestLY on Jan 06, 2021 10:25 AM IST. For more news and updates on politics, world, sports, entertainment and lifestyle, log on to our website latestly.com).