Two persons were killed and 13 others rescued by National Disaster Response Force (NDRF) from the debris of a building that collapsed in Mumbai on Thursday. 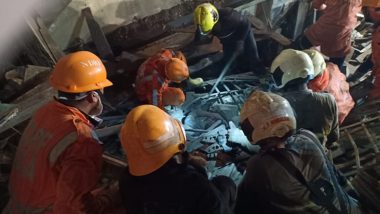 Mumbai, July 16: Four persons were killed and 13 others rescued by National Disaster Response Force (NDRF) from the debris of a building that collapsed in Mumbai on Thursday. The rear part of a five-storied Bhanushali building collapsed at the Fort area in south Mumbai following incessant rainfall in the city. More people are feared to be trapped there. A rescue operation by the Mumbai Fire Brigade and a team of the NDRF was underway. Landslide in Mumbai's Ghatkopar Damages 9-10 Houses, No Casualty.

The Brihanmumbai Municipal Corporation (BMC) said the Bhanushali building, which was undergoing repairs, had been evacuated. But some persons continued to live there. "I have heard that repair work was underway at the building. The families still in the building will be evacuated," Shiv Sena lawmaker Arvind Sawant told reporters. Maharashtra Chief Minister Uddhav Thackeray arrived at the spot and supervised the relief works.

State Housing Minister Jitendra Awhad, Mumbai Mayor Kishori Pednekar and Municipal Commissioner Iqbal Singh Chahal also visited the site. In a separate incident in Mumbai's suburbs, two persons were killed and 13 others were dug out of the debris of a three-storied tenement that crashed due to heavy rains at Malvani in Malad West. Four fire engines, a rescue van and ambulances were rushed to the spot.

The victims have been identified as 23-year-old woman Anjum S. Shaikh and an 18-year- old Faizal W. Sayyed. The rescued people were treated for minor injuries and discharged by Hayat Hospital nearby.

(The above story first appeared on LatestLY on Jul 16, 2020 11:09 PM IST. For more news and updates on politics, world, sports, entertainment and lifestyle, log on to our website latestly.com).