NRC Assam Final Draft to be Out at 10 AM Today at nrcassam.nic.in, Know How to Check Names in National Register of Citizens

The final draft of NRC Assam will be published online at nrcassam.nic.in and in all the NRC Sewa Kendras (NSK) across the state. 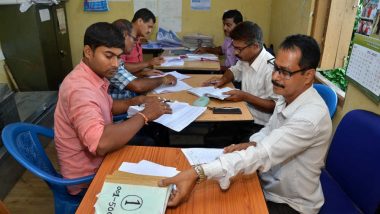 NRC officials busy with the publication of the final draft of updated NRC (Photo Credit: IANS)

Guwahati, July 30: The Assam government will release the second and final draft of National Register of Citizens (NRC) at 10:00 am today, amid tight security. The final draft of NRC Assam will be published online at nrcassam.nic.in and in all the NRC Sewa Kendras (NSK) across the state. The draft of Assam's NRC will feature the names, addresses and photographs of all Indian citizens, who have been residing in the north eastern state before March 25, 1971.

Ahead of the declaration of NRC, authorities highetened security across the state to prevent any law and order situation. Prohibitory order under Section 144 of CrPC has been imposed in seven districts– Barpeta, Darrang, Dima Hasao, Sonitpur, Karimganj, Golaghat and Dhubri. States sharing border with Assam were also on high alert to thwart possible infiltration of illegal immigrants. The NRC, which was prepared in 1951, is updated for only Assam to weed out illegal Bangladeshi immigrants.

NRC Assam Draft List: How to Check Names in National Register of Citizens Online and Via SMS

Step 3: You will have to submit your Application Receipt Number (ARN) number, which is printed on the front page of the NRC form you filled.

Step 5: Make sure you have not activated DND on your mobile number.

(The above story first appeared on LatestLY on Jul 30, 2018 12:07 AM IST. For more news and updates on politics, world, sports, entertainment and lifestyle, log on to our website latestly.com).