Hyderabad Metro on Sunday shut three metro stations in view of the BJP public meeting at Parade Grounds in Secunderabad which is scheduled to be addressed by Prime Minister Narendra Modi and other top BJP leaders in the evening. 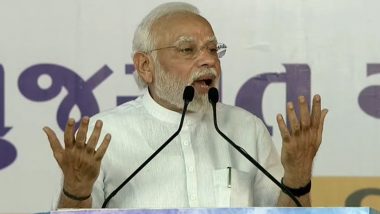 Hyderabad, July 3: Hyderabad Metro on Sunday shut three metro stations in view of the BJP public meeting at Parade Grounds in Secunderabad which is scheduled to be addressed by Prime Minister Narendra Modi and other top BJP leaders in the evening.

Hyderabad Metro announced closure of the Paradise, Parade Grounds and JBS Stations between 5.30 p.m. and 8 p.m. Corridor 2(JBS-MGBS) trains will run between Secunderabad West and MGBS during this time. 'Congress Suffering From ‘Modi Phobia’, Next 30 Years Will Be Era of BJP', Says Union Home Minister Amit Shah

Hyderabad Metro Rail (HMR) Managing Director N.V.S. Reddy said the trains will not stop at three metro stations in view of the security concerns around the Prime Minister's public meeting.

However, there will be no restrictions on Corridor 1 (Miyapur-LB Nagar).

Earlier, Hyderabad Metro officials had said that the Metro operations will not be affected by the public meeting.

The police have advised the public to avoid all roads and junctions within a three-kilometre radius of the Parade Grounds. Traffic was being diverted at several points in view of the VVIP movement from Hyderabad International Convention Centre (HICC), the venue of the national executive committee meeting of the BJP to the Parade Grounds.

While the Prime Minister and a couple of other top leaders are likely to reach the venue of the public meeting by helicopter, several Union Ministers, Chief Ministers and other key leaders will be travelling by road. Traffic diversions are likely at Madhapur, Jubilee Hills check post, KBR Park, Punjagutta, Greenlands and Begumpet to facilitate smooth VVIP movements.

Elaborate arrangements have been made for the public meeting. More than 3,000 policemen have been deployed as part of the security arrangements.

Telangana BJP leaders expect a gathering of 10 lakh people for the massive show of strength. Thousands of people have already reached Hyderabad by trains and buses from various parts of Telangana.

The organisers have erected tents in view of the likely rains. They have also arranged 40 generators to ensure uninterrupted power supply.

A BJP leader said 40 LED screens have been installed at the venue for the audience.

Three daises have been erected. While PM Modi, BJP President J.P. Nadda, home minister Amit Shah and about 35 other top leaders will occupy the main dais, other Union Ministers and important leaders will be seated on the second dais. A third stage is meant for artistes, who will be entertaining the audience with their performance depicting Telangana's culture.

(The above story first appeared on LatestLY on Jul 03, 2022 04:20 PM IST. For more news and updates on politics, world, sports, entertainment and lifestyle, log on to our website latestly.com).