Union Minister Ananth Kumar Passes Away at the Age of 59, PM Modi Condoles His Death 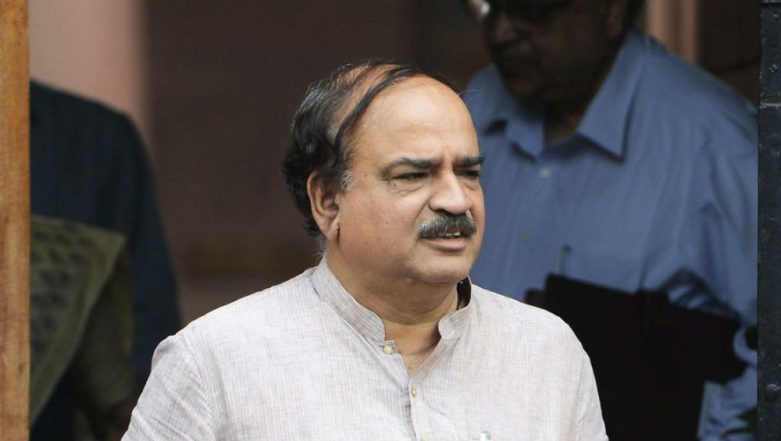 Cabinet Minister Ananth Kumar passed away at a private hospital in Bengaluru in the early hours of Monday, a BJP party spokesman said. Kumar was suffering from cancer and had returned to the country only last month after treatment in the U.S.

Kumar, 59, is survived by his wife and two daughters. He was with his family when he breathed his last. He died at around 4 am, a party spokesman told PTI.

Kumar, was battling pancreatic cancer for the last several months and had visited London and New York for treatment. He had received treatment  at the Memorial Sloan Kettering Cancer Centre, New York.

Kumar's body, which has been taken to his Basavangudi residence, will be kept for public viewing at the National College Grounds from 8 am onwards.

Kumar was a BJP MP from south Bengaluru constituency and was instrumental in building the party's support base in the southern state. He was a six-time Parliamentarian, who began his political career as an Akhila Bharatiya Vidyarthi Parishad (ABVP) leader. He held charge of two key ministries -- Chemicals and Fertilizers since the NDA government took charge in May 2014 and was given the responsibility of Parliamentary Affairs since July 2016 in the Narendra Modi government.

Prime Minister Narendra Modi condoled the demise of his party man and minister. "Extremely saddened by the passing away of my valued colleague and friend, Shri Ananth Kumar Ji. He was a remarkable leader, who entered public life at a young age and went on to serve society with utmost diligence and compassion. He will always be remembered for his good work," he tweeted.

Ananth Kumar Ji was an able administrator, who handled many ministerial portfolios and was a great asset to the BJP organisation. He worked hard to strengthen the Party in Karnataka, particularly in Bengaluru and surrounding areas. He was always accessible to his constituents.

I spoke to his wife, Dr. Tejaswini Ji and expressed condolences on the passing away of Shri Ananth Kumar Ji. My thoughts are with his entire family, friends and supporters in this hour of grief and sadness. Om Shanti.

Defence Minister Nirmala Sitharaman also expressed her sorrow over Kumar's death. "Deep sense of grief on hearing that Shri @AnanthKumar_BJP is no more with us. Served @BJP4India @BJP4Karnataka all along. Bengaluru was in his head and heart, always. May God give his family the strength to bear with this loss," she tweeted.