Sawan Month 2021: Shravan Will Start on July 25; From Monday Fasting Schedule to Its Significance, Here's Everything You Need To Know About This Holy Month Dedicated to Lord Shiva

The Sawan Month will begin from 25th July and is estimated to end on August 22. In this article, we will provide everything you need to know about the month of Sawan or Shravan, replete with date, time and the celebrations observed by devotees 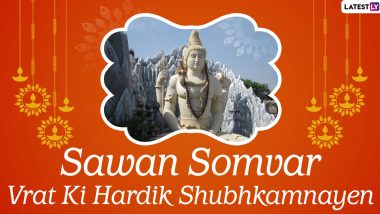 The month of Shravan or Sawan is a celebration of Lord Shiva.  Shravan falls on the fifth month of the Hindu calendar. This day holds great significance for Shiva devotees and is considered extremely important in Hinduism. In the month of Sawan,  Lord Shiva is worshipped with great reverence and Monday's are particularly dedicated to the worship of this deity.  Shiva devotees usually swarm temples to pay their respects to this Hindu God, as they believe the month, there is greater strength in prayers offered during the month of Sawan. Women also fast during Mondays to pay homage to this god. In this article, we will provide everything you need to know about the month of Sawan or  Shravan, replete with date, time and the celebrations observed by devotees at large.

What is the date of Sawan?

The month of Shravan begins after the month of Ashadha, according to Hindu Calendar (Panchang). Panchang lists the end of Ashadha on July 24th, Ergo, the Sawan month begin from 25th July and is estimated to end on  August 22.

What are the fasting dates?

During Sawan Month, people (mostly women) fast on Monday's and this month the Sawan fasting dates will be observed as follows:

In Hinduism, the month of Sawan is observed with great reverence by the devotees of Lord Shiva. It's not just the devotees, but religious folks at large are quite enthused about celebrating this month. Hindus believe, that during Sawan, worshipping the Lord will bear good fortune and great tidings. And Fasting on Monday in this month will bear extra clout. They also believe that worshipping Shiva, will bring an end to all misery in the world and perhaps all their sins will be wiped clean and they can attain salvation.

(The above story first appeared on LatestLY on Jul 08, 2021 01:00 PM IST. For more news and updates on politics, world, sports, entertainment and lifestyle, log on to our website latestly.com).