David Warner Receives Backing From Brett Lee, Says Dropped Sunrisers Hyderabad Player Was Not Even Allowed To Go the Stadium During IPL 2021

The 34-year-old Warner scored 195 runs in eight games at an average of 24.37 and was dropped from the squad towards the end of the IPL season. He has scored 17 runs in his last five T20 innings for the Sunrisers Hyderabad and Australia. 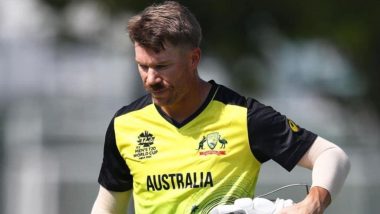 Sydney, Oct 26 (IANS) Former Australian pace bowler Brett Lee has come to the aid of embattled country-mate David Warner, saying that the veteran opening batsman was "poorly treated" throughout the Indian Premier League by his franchise, Sunrisers Hyderabad (SRH). Warner, who is currently in the UAE with the Aaron Finch-led Australian side for the ICC T20 World Cup, was the SRH captain before he was removed and New Zealand's Kane Williamson handed over the reins after a string of reversals for the Hyderabad franchise during the India leg of the lucrative league in May. SRH finished at the bottom of the table in the IPL 2021 season, which was completed in the UAE recently, with Chennai Super Kings emerging champions. David Warner Gears Up for AUS vs SL T20 World Cup 2021 Game, Posts Photo in Team Australia Jersey

The 34-year-old Warner scored 195 runs in eight games at an average of 24.37 and was dropped from the squad towards the end of the IPL season. He has scored 17 runs in his last five T20 innings for the Sunrises and Australia (14 vs South Africa in ICC T20 Super 12 game). But Lee was confident that Warner will soon find form and confidence.

"The tide will turn, he's a class player, you don't lose class overnight. The thing I'll say about David Warner is he was so poorly treated throughout the IPL," Lee told SEN Breakfast on Tuesday. "To firstly get stripped of his captaincy, then to be dropped from the Sunrisers Hyderabad team, not being allowed to go to the ground -- if you want to wreck someone's confidence for a few games, that's the best way to do it. He's always been one of the top run-getters in the T20 format, certainly in the IPL.

"I'm expecting big things from David Warner, and I reckon he'll turn his form around," added Lee. Australia will take on Sri Lanka in their second T20 World Cup 'Super 12' match in Dubai on October 28.

(The above story first appeared on LatestLY on Oct 26, 2021 01:25 PM IST. For more news and updates on politics, world, sports, entertainment and lifestyle, log on to our website latestly.com).