Australia batting stalwart David Warner's wife, Candice, has come down heavily on Cricket Australia (CA) for the "injustice" meted out to her husband in the wake of the ball tampering scandal, also called 'sandpaper-gate' in the Cape Town Test in 2018, saying the ban on his leadership role should be lifted as quickly as possible. 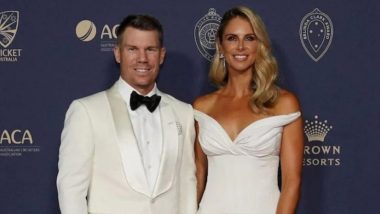 David Warner and his Wife(Twitter)

Melbourne, July 5 : Australia batting stalwart David Warner's wife, Candice, has come down heavily on Cricket Australia (CA) for the "injustice" meted out to her husband in the wake of the ball tampering scandal, also called 'sandpaper-gate' in the Cape Town Test in 2018, saying the ban on his leadership role should be lifted as quickly as possible. Three Australia cricketers -- the then-skipper Steve Smith, his deputy Warner and Cameron Bancroft -- were banned from playing international and domestic cricket for varying periods not exceeding a year in the aftermath of the scandal. While Smith was barred from taking up a leadership role for two years, Warner was banned from any such role for the rest of his professional life. Cricket West Indies Congratulates Sir Vivian Richards on Order of the Caribbean Community Award.

Candice Warner sounded a warning on Monday saying her husband could be lost to Big Bash League (BBL) for good. Warner has been in great form of late both in the Indian Premier League 2022 season as well as playing for the country. He played a pivotal role in Australia winning its maiden ICC T20 World Cup title in the UAE last year and played some smashing innings in the recently-concluded white-ball series against Sri Lanka.

BBL side Sydney Sixers coach Greg Shipperd too has requested CA to allow Warner to at least lead the domestic side, given that he had diligently served his ban post the sandpaper-gate scandal and had been "making a great contribution to the team and to cricket in general across the globe". "I don't like injustice so it does bother me... but it doesn't bother him because he can go and captain in the UAE, he can go captain in India (IPL) where people appreciate his cricketing brain and what he can bring to a team," a report in Daily Mail quoting Candice on Triple M's Dead Set Legends, said. David Warner Should at Least Be Allowed To Lead a Domestic Side, Urges Sydney Sixers Coach Greg Shipperd.

Candice said David had several lucrative captaincy offers in domestic T20 tournaments across the world. "You take each day as it comes and there were plenty of opportunities for David to play in Canada and in the Caribbean. There are definitely times when as an athlete you go, 'OK, well, I could go sit there and get really upset or I set goals moving forward'. "David has an incredible T20 record in India, in Australia, he's one of our best ever. Regardless of whether the ban is lifted or not, if he plays Big Bash, it's a decision we talk about what's best for the family in this period. Also there's another league going on in the UAE, which financially (has) much bigger money. It's not just a matter of lifting Dave's ban; it's a matter of what's best for our family. And Dave's just accepted he has this ban now," added Candice.

(The above story first appeared on LatestLY on Jul 05, 2022 02:46 PM IST. For more news and updates on politics, world, sports, entertainment and lifestyle, log on to our website latestly.com).