Cricket West Indies (CWI) congratulated Sir Vivian Richards on Tuesday (IST) on his being presented with the prestigious award, the Order of the Caribbean Community (CARICOM). 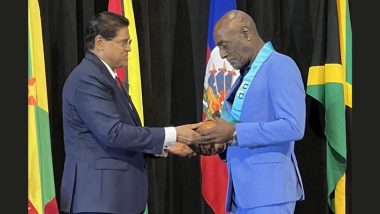 St John's (Antigua), July 5: Cricket West Indies (CWI) congratulated Sir Vivian Richards on Tuesday (IST) on his being presented with the prestigious award, the Order of the Caribbean Community (CARICOM). The legendary West Indies captain received the accolade at the 43rd Conference of Heads of Government in Suriname on Sunday evening. It was presented by Chan Santokhi, President of the Republic of Suriname. "On behalf of the Board of Directors of CWI and the entire West Indies Cricket community, I want to congratulate Sir Viv on this tremendous honour, which was conferred on him by CARICOM," Skerritt said. IND vs ENG 5th Test: Ravi Shastri Says India Were Disappointing and Timid To Say the Least on Day 4.

"It is a most fitting honour for a true hero of our region, a man who demonstrated to the world that Caribbean people are capable of punching above our weight by achieving excellence globally. Sir Viv took the baton from the pioneers of West Indies Cricket and established new levels of greatness and dominance for others to follow. "He used his God-given talents, his mental and physical readiness, and his cricket bat, to bring glory to West Indians all around the world," said Skerritt. Richards is recognised globally as one of the greatest sporting figures of all time. He is one of the most successful batsmen in cricket history and was a star performer in the Cricket World Cup finals on two occasions when West Indies won in 1975 and 1979. IND vs ENG 5th Test: Danish Kaneria, Former Pakistan Cricketer, Questions Ravichandran Ashwin’s Exclusion in Rescheduled Test.

He represented the West Indies between 1974 and 1991 and played 121 Test matches and 187 One-Day Internationals. He scored 8,540 runs in Tests, with 24 centuries and 6,721 runs in ODIs with 11 centuries. During Sunday's ceremony, CARICOM also honoured three other distinguished people. These are: legendary calypsonian David Rudder, singer of the West Indies Cricket Anthem, Rally Round The West Indies; Dame Billie Miller, former Deputy Prime Minister of Barbados; and Ambassador Irwin LaRocque, former Secretary-General of CARICOM.

(The above story first appeared on LatestLY on Jul 05, 2022 01:17 PM IST. For more news and updates on politics, world, sports, entertainment and lifestyle, log on to our website latestly.com).