Chasing 315 for a win, Bangladesh folded up for 286 as India not only won the match by 28 runs, but also qualified for the knockout stages. 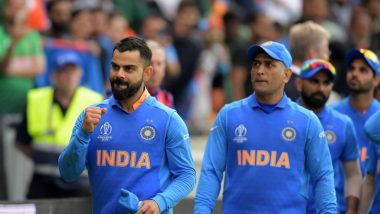 Birmingham, July 2: India's batting in the last 10 overs at the Edgbaston Cricket Ground on Tuesday might have given hope to some fans of a Bangladesh fightback, but two things they forgot -- the experience of the Indian bowling attack and the slowness of the wicket. After all, this was the same pitch where India played England on Sunday. Chasing 315 for a win, Bangladesh folded up for 286 as India not only won the match by 28 runs, but also qualified for the knockout stages. Virat Kohli, Rohit Sharma Meet 87-Year-Old Team India Fan Charulata Patel After India Makes it to CWC 2019 Semi-Finals With Win Over Bangladesh (Watch Video).

Defending 314, in-form Shakib Al Hasan was the only real threat for the Indian bowlers as the Bangladesh batsmen came out pretty subdued in their chase. And once Hardik Pandya sent back Shakib for 66, caught by Dinesh Karthik, in the 34th over, it was advantage India. The otherwise dangerous Mushfiqur Rahim also flattered to deceive as he hit a 23-ball 24 before Yuzvendra Chahal got him to sweep one straight to Mohammed Shami at square-leg.

Sabbir Rahman (36 off 36 balls) and Mohammad Saifuddin (52 not out off 38 balls) did try their best, but getting 90 runs from the last 10 overs with just four wickets in the bag proved to be a bit too much to expect from the Bangladesh lower-order after the top-order failed to provide the platform required while chasing scores in excess of 300.

But credit to Saifuddin for keeping Bangladesh in the game right till the end with a quickfire unbeaten half-century. Earlier, the Men in Blue rode a brilliant 104 from Rohit Sharma -- his fourth century in this edition of the showpiece event -- to post 314/9 in their 50 overs. Not to forget the brilliant comeback from Mustafizur Rahman as he finished with a fifer.

With skipper Virat Kohli opting to bat first, it was all about starting well. And Indian openers Rohit and K.L. Rahul did just that as they took the attack to the Bangladesh bowlers from the word go. India vs Bangladesh Highlights of ICC World Cup 2019 Match: IND Qualify for Semi-Finals, BAN Knocked Out.

In fact, the otherwise cautious Rohit made his intentions clear early into the match as he hit Bangladesh skipper Mashrafe Mortaza for a six in the very first over of the innings. And with Tamim Iqbal dropping him on 9, it was just the kind of leeway the opener needed to shift gears and deal only in boundaries.

Rahul on the other hand was happy to mix caution with aggression as the duo finished the first powerplay on 69/0. The Bangla bowlers wore a confused look as they were clearly short of ideas. Not just the bad balls, even the good deliveries were sent to the boundary as Rohit and Rahul looked like they were keen to break the backbone of the Bangladesh bowling attack.

With the Indians looking to up the ante, Mortaza finally turned to Soumya Sarkar in the 30th over and the part-time bowler broke the 180-run opening partnership, the highest in this edition of the World Cup, as he sent back Rohit moments after he reached his 26th ODI century.

Rahul (77) followed back three overs later as Rubel Hossain got him to cut one that was too close to the body and Mushfiqur Rahim picked up a smart catch behind the wicket. The score read 195/2 as Rishabh Pant joined Kohli in the middle.

But Kohli looked slightly jittery from the start and wasn't his usual fluent self even though he did hit some of his vintage flicks and drives. In the 39th over Bangladesh came right back into the game as Mustafizur first sent back Kohli (26) and then dismissed Hardik Pandya (0) as the scoreboard suddenly went from 237/2 to 237/4. Meet Charulata Patel, the 87-Year-Old Fan Cheering For India During IND vs BAN, CWC 2019 Tie (Watch Video).

At the end of the 40th over, the score read 251/4 as Pant and M.S. Dhoni looked to consolidate as also keep up the momentum. Pant (48) was dismissed in the 45th over as an attempted sweep landed in the hands of Mossadek Hossain who held on after some juggling act. Dhoni did try his bit at the end as he hit a 33-ball 35, but the Bangla bowlers came back strongly as they picked up 5 wickets in the last 10 overs in which India managed just 63 runs.

(The above story first appeared on LatestLY on Jul 03, 2019 12:00 AM IST. For more news and updates on politics, world, sports, entertainment and lifestyle, log on to our website latestly.com).