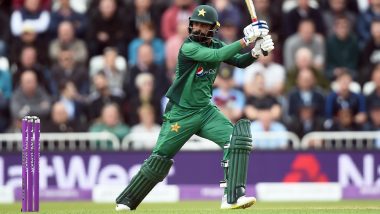 Interestingly, Hafeez after initially testing positive went under private testing and was found negative. The senior cricketer has now turned negative in the second round of tests conducted by the PCB. Meanwhile, PCB has confirmed that 20 players, who tested negative earlier, will travel to England on Sunday (June 28). The players are mainly part of Test squad and includes Test captain Azhar Ali and vice-captain Babar Azam. Pakistan Arriving on June 28 for England Tour, Will Play 3 Tests and 3 T20s Without Spectators.

20 players to travel to England on Sunday. More details to follow shortly. pic.twitter.com/p9PPRWGd95

Another Round of Testing

The six players who tested positive but have now tested negative will undergo a third round of testing at some stage next week and if their tests remain negative, then the PCB will make arrangements to send them to England #ENGvPAK #Cricket

PCB had conducted retests of all the players and those who were earlier found negative were once again found so. Apart from four players team masseur Malang Ali tested negative again. Pakistan are scheduled to play three Tests and as many T20 Internationals against England. The tour is likely to kick-off after England vs West Indies Test series, which ends on July 28.

(The above story first appeared on LatestLY on Jun 27, 2020 05:34 PM IST. For more news and updates on politics, world, sports, entertainment and lifestyle, log on to our website latestly.com).